Alternative Titles/Edition History:
AKA The Spanish Civil War 1.  SCW1 and its sister module SCW2 (both 2015) together comprise what is effectively the third edition of Guerra Civil/Condor Legions.

SCW1 (called The Spanish Civil War 1 in the rules) is, along with its sister module, SCW2, actually the third edition of an older product that has previously gone under the titles Guerra Civil and Condor Legions.  The original module was broken into two separate modules for its third edition, presumably in order to charge consumers more.  Readers should visit those write-ups before reading the following write-up.

SCW1 is the first half of the 3rd Edition of this product.  However, one does not need to have purchased SCW2 in order to play the scenarios of SCW1 (however, players will need a host of official products, including Chapter F rules).  The rules for SCW1 are essentially the same as in previous editions, though more attractively laid out and printed in loose-leaf (hole-punched) full color format.  The counters are also the same as in Condor Legions–even to the extent of still proclaiming themselves as “Condor Legions” countersheets–which means that they continue to have the very dark green counters that marred Condors Legion to some extent.

That basically leaves the boards and here is where things get interesting or irritating, depending on one’s point of view.  The original Guerra Civil came with two unmounted geoboards (SCW1 and SCW2), as did Condor Legions, though the latter product’s boards were printed with a mis-sized hexgrid that did not allow proper mating with official geoboards.  SCW1 comes with not just two but a whole host of geoboards, making this the most significant difference between it and prior editions.

One might think that this was a good thing–however, that is not so, for several reasons.  First, the physical quality of the boards are problematic, in that each board comes in two separate halves, each half printed on 9″ x 12″ heavy paper/light cardstock, and none of the halves trimmed.  All have a white border around every edge, which means that players must laborious use scissors, a razor blade or some other cutting device to trim the edges off 18 different half-boards.  Critical Hit saves some pennies, while players must painstakingly assemble their own boards, as if from a kit.  The hexgrids are still not quite right, either, but in this case it won’t matter because the product does not use any official geoboards.

Second, the graphics of these boards use the “Sweet 16” style of geoboard graphics created by Critical Hit (more on that below), which is problematic because of the very bad building graphics.  Buildings that do not line up perfectly horizontally or vertically appear with jagged, crude graphics that look pixelated as if from an old video game.  These substandard graphics are not as pernicious as in some other Critical Hit products, mostly because buildings tend to be very small on most of the boards included with SCW1, so the effect is not as great, but they are still irritating.  The boards do contain new artwork for olive groves and vineyards, the latter cribbed from Primosole Bridge.

Board SCW1 is a new version of the SCW1 that appeared in previous editions, as is Board SCW2 for its older equivalents.  Board SCW3 is actually the large building overlay from the previous editions, now expanded into a full board.  So far so good, but here is where things start to go off the rails.  SCW1 comes with 6 more boards.  What are they and where did they come from?

The answer is that all of these boards are also re-treads.  Actually re-re-treads.  They are slightly re-worked versions of Sweet 16 geo-boards, which are themselves derivative “alternative” versions of official geoboards.  Critical Hit first released several “Sweet 16” map packs, hoping people would spend a lot of money buying somewhat different variations of official boards they already owned. Then Critical Hit released “winterized” versions of these boards, hoping that people would buy them yet again.  Then Critical Hit plagiarized themselves once more and slightly re-worked the same boards to include in their GWASL (World War I) modules.  Now Critical Hit is offering the same boards for fourth time in just a couple of years, hoping that ASLers will re-buy them once more.  How similar are they?  To give an example, Sweet 16 geoboard x2 (a derivative variation on official board 2) appears in SCW1 as board SCW5.  The only differences between x2 and SCW are the addition of a few olive groves. 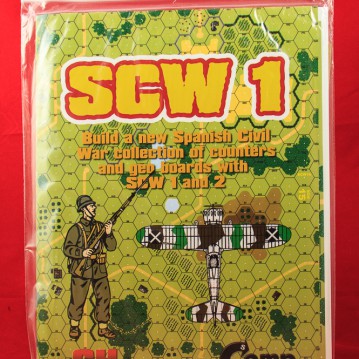