Teutonic Terror is a 4-part (to date) series of scenario/map packs published by Critical Hit in 2019.  Desperation Morale has physically examined the first pack in this series but has not physically examined the other three packs.  Because of their similarities, all packs will be grouped together under this single entry. Critical Hit claims that there will eventually be 50+ boards in this series, but the history of the company shows that Critical Hit usually abandons its series relatively quickly, so this may or may not happen.

Each pack contains 2-4 nonstandard-sized geoboards, each formed from a single glossy 12″ x 18″ heavy paper/light cardstock board. The boards mate with each other, but not with 8″ x 22″ or 11″ x 16″ geoboards. The hexes are just a tad larger than standard-sized ASL hexes.  The edges of each board are not trimmed to the hex-spines, so players will have to overlay one board on top of another to get them to mate, which is rather irritating.

The artwork for the boards is standard Critical Hit artwork of this era: generally good, except the building artwork is a bit lacking, although the blur and pixelation problems of other Critical Hit buildings are only slightly in evidence here.

Each pack uses boards from previous packs as well as its own boards, meaning that these are not standalone products that can be purchased separately.  Exactly what board comes with what product is surprisingly unclear.  Critical Hit marketing material claims each pack comes with three boards, except Teutonic Terror 1, which has a “bonus” board (Desperation Morale’s copy does indeed have four boards).  However, photographs of the various packs from Noble Knight Games suggests Pack 1 has 4 boards, Pack 2 has 3 boards, Pack 3 has 3 boards, and Pack 4 has 4 boards. However, again, the Scenario Archive shows Pack 1 scenarios using 4 boards, Pack 2 scenarios using those boards plus 4 more, Pack 3 using all those boards plus only two more, and Pack 4 using its own boards. This is very confusing. It seems to be the case that Pack 2 has one or more scenarios in it which actually require a board (TT8) from Pack 3. For now, that’s what we’re going with.

Each pack also contains 8 scenarios.  These are not original scenarios, Critical Hit admits, but are rather “new versions ported to this series of boards and none are exactly as any past scenario.”  It does not seem that any were replaytested despite being moved over to new boards.

At the time these products were released, Critical Hit also released–for separate purchase, of course–so-called “HotHex” versions of the boards of each product. These “HotHex” boards are large-hex versios of the boards (seemingly double-sized).

Because Critical Hit does not usually support its own boards beyond the module or series they appeared in, and because the scenarios here are not even original and were almost certainly not re-playtested when moved to the new maps, there is little reason to purchase any of these products except to have the maps for DYO purposes.

Teutonic Terror 1 contains Boards TT1-TT4. Board TT1 has a rubble- and shellhole-strewn village on one half and open grounds and woods on the other. Board TT2 is a rural board with only a single building and random orchards, hedges, and patches of woods.  Board TT3 is another rural board, featuring a crossroads hamlet on one half and grain and brush on the other.  Board TT4 is dominated by a large level-3 hill with brush and shellholes on and around it.  The 8 scenarios of Teutonic Terror 1 are all German (half Heer, half SS) vs. Soviet East Front actions. So, for example, TT2 (A Park in Vienna) is simply a re-do of Panzers in the Park from Total East Front Pack I.  Similarly, TT4 (Finnwolf) is a recycled version of Olin’s Surprise from the same pack.

Teutonic Terror 2 contains Boards TT5-TT7.  TT5 is a rural board dominated by large grainfields and patches of orchard and brush, dotted by ponds.  TT6 is a woods board, dominated by a large woods mass.  TT7 is a river board with a meandering river and a hamlet next to it.    The pack’s 8 reprint scenarios are all German-Soviet East Front actions (one has SS).

Teutonic Terror 3 contains Boards TT8-TT10.  TT8 has a long, narrow hill mass partially covered with woods.  TT9 has two woods masses but is otherwise open.  TT10 is very open, save for a large grain field and a level-1 hill.  The 8 reprint scenarios are all East Front actions, with one featuring Germans and Finns, another featuring Soviet partisans, and the rest being straight German-Soviet actions.

Teutonic Terror 4 contains Boards TT1w-TT4w; unlike previous boards, these are winterized boards.  TT1w is a rural board with a mix of woods, orchards, and marsh.  TT2w is a woods board that also contains a small hamlet.  TT3w features woods and a village.  TT4w is pretty wide open, with the occasional woods, or orchard, as well as a small, low hill. Unlike the previous three releases, the 8 recycled actions here are all Battle of the Bulge actions featuring Germans (SS in 5 of the 8) vs. Americans. 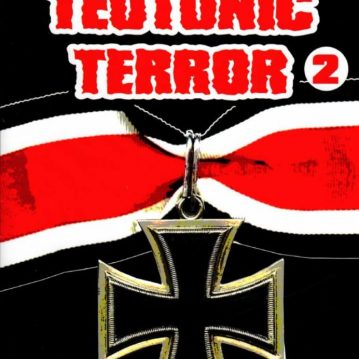