Home > Products > The Battle of Königsberg: The Bear’s Revenge

The Battle of Königsberg: The Bear’s Revenge (hereinafter BK) is a historical module published by Lone Canuck Publishing primarily because it wanted a module featuring a letter in the title that no one could find on their keyboard.  The module depicts fighting in the center of the encircled East Prussian city of Königsberg in April 1945 as the Germans–for no particular reason other than fanaticism, in these last days of the war–fought to deny the city to the Soviets.

The module, which features a large historical map and a sheet and a half of die-cut counters, represents Lone Canuck’s largest and most significant physical production yet, bringing Lone Canuck into the same capabilities arena as Le Franc Tireur or Bounding Fire Productions.  It represents only a part of a project that was originally larger in scope, and LCP honcho George Kelln has said there could be a BK2 at some point in the future, though LCP has many projects lined up in front of it.

The centerpiece of BK is its historical map, which depicts the area of the city center of Königsberg south of the Pregel River (after the war, the Soviets took Königsberg for their own, renaming it Kaliningrad, and replacing the German population with a Russian one, making it a small Russian enclave situated between Poland and Lithuania).  The map is separated into two sections (for ease of printing primarily and ease of use secondarily). The western half of the map is dominated by the “Alte Strumpfbandwiese” (Old Garter Meadow), an area of saturated open ground south of the Pregel and north of the Nasser Garten (an outlying area, largely destroyed on the map), and the massive railyards to the east of the meadow, with train stations, repair yards, and various other train-related apparatus.

The eastern map is dense inner city urban terrain, bisected by the winding Pregel River,  including the island of Kneiphof. This means that if players get tired of playing ASL, they can actually ponder the classic mathematical puzzle of The Seven Bridges of Königsberg.

Model of island of Kneiphof. By own photography – Stadtmuseum Kaliningrad, CC BY-SA 3.0, https://commons.wikimedia.org/w/index

The terrain of Königsberg is interesting. Obviously, the Pregel River itself plays a significant role. So too do the effects of the days of heavy artillery bombardment by the Soviets in early April before they launched their assault on the city.  Rubble and debris are strewn everywhere, with shellholes hardly absent, either. Virtually every standing building is Partially Collapsed or Roofless and Gutted. And yet, at the same time, Königsberg is a city with plenty of squares and wide boulevards–meaning that units moving through such hexes which don’t have shellholes, rubble, or debris in them will incur their dreaded -1 TEM.

The map artwork is drab–there are really only three colors on the map: one shade of green, the blue of the Pregel, and various shades of black/gray. However, given the nature of the situation, it’s not clear that some other artist would have portrayed the city significantly differently.  The artwork is solid, though perhaps not great.  Lone Canuck took care to label many streets and buildings, which is a nice touch, adding historicity, although they unfortunately chose to render every label in German.  That’s okay for the streets, perhaps, but is the average ASL player going to know what the Kneiphof Stadt Gerichtsgebäude is? One odd inconsistency in that regard is that all the bridges on the map are labeled as “bridges” rather than the German “Brücken.”

Players who examine the map, with its northern and eastern edges featuring only slices of land north/east of the Pregel River, might justly wonder how much play those areas might even see.  It’s a valid question.  None of the scenarios use any of that map area.  The campaign game uses the entire map, and has victory conditions that require the Soviets to have more VP north of the Pregel than the Germans have south of it, but the VC themselves suggest that most of the action will take place south of the Pregel.

BK includes 4 pages of historical notes (which mostly provide broad context and do not get into the nitty gritty small-unit action) and a 30-page set of rules (including campaign game charts/records).  Most of the rules, of course, are dedicated to the campaign game, but even scenario players must absorb a fair amount of rules, including rules for irrigation ditches, saturated ground, train stations, piers, railcars, city gates, and even slope rules (seemingly for just one hex). The BK rules also reference rules from Red Factories, Festung Budapest, and Valor of the Guards, so players will need to own these modules or at least have access to their rules.

Players must also absorb the rules for new unit types–which unfortunately are hidden within the campaign game rules instead of where they should be, at the front. There are a number of new German units (the module is pretty Germanocentric), including SS-Feldgendarmerie troops, which are represented by special 4-4-7 SS squads that increase the morale of other MMC present in its location and which inhibit routing.  There are also Volksturm present, represented by 3-3-6 conscript squads that can’t deploy, as well as Hitler Youth, who appear as 4-3-7 green squads likely to go berserk (they seem quite ahistorically powerful for untrained adolescents).  There are also Nazi Party Leaders who have commissar-like abilities.

The Germans in BK can also ALL become Fanatic for an entire campaign game date of the German player’s choosing.  They also have various Fanatic Strongpoint Locations that make their occupants Fanatic.

Both the Germans and the Soviets have Artillery Observer Teams.  The Soviets themselves, however, get only one new type of unit exclusively to themselves:  Faustnika squads.  These are Soviet 6-2-8 squads featuring a Panzerfaust symbol that have inherent Panzerfaust capabilities similar to the Germans, as well as a slight smoke exponent.

Unfortunately, the color of the counters are a little off.  First, the Soviet 5/8″ counters are not the same shade of brown as the Soviet 1/2″ counters.  The German counters have the same shade of blue on both sheets, but the blue is darker than the German blue of Beyond Valor. The color is actually pretty much the same as the blue on the game box for the 2nd edition of Croix De Guerre. Now, these are third party counters, not official counters, and moreover, Lone Canuck is still just getting into the arena of counter product, so they need to be cut a great deal of slack.  The counters are attractive and functional despite the slight color issues.

BK comes with one campaign game, The Bear’s Revenge, which is a 7-date campaign game in which the Soviets must destroy German forces south of the Pregel while getting some of their own forces north of it. The campaign game is intended to depict fighting primarily between the German 61st Infantry Division and the Soviet 31st Guards Rifle Division. The campaign game rules are derived from those of Red Barricades. Both sides ahave a lot of options for purchase, including the occasional toys (such as Goliaths for the Germans and flame-throwing tanks for the Soviets).  There’s not a ton of armor (the Soviets have more opportunity for it), but then this is a city fighting situation.

The BK credits list many people, but the actual number of people who worked to playtest the module is not clear, because George Kelln’s list includes not only playtesters but also “any who may have helped out with the project,” which is an ambiguous statement indeed–the more so because Kelln’s list includes numerous people who do not seem as if they could have either playtested or “helped out” with the product, including the members of the Winnipeg ASL Club during the period 1995-2001, as well as three deceased people, at least one of whom, Jim McLeod, has been dead for quite some time.

In addition to the campaign game, BK comes with 6 scenarios, although scenarios always seem to be the red-headed stepchildren of Lone Canuck historical modules, few in number and generally small.  There is certainly not the scenario play value here of a Red Factories, Festung Budapest, or Valor of the Guards.  However, there are at least some larger scenarios.  BK features two small scenarios, two medium-sized scenarios and two large scenarios, which is not a bad mix.  However, the Germans are always on the defensive and typically have considerably smaller forces that must hunker behind fortifications.

The scenarios of BK include:

One of the large scenarios of BK, KBR1 (Advanced to the Pregel) qualifies as a monster-sized historical scenario, the first Lone canuck has ever published. It utilizes the entire map area south of the Pregel.  The attacking Soviets have 66 squads, 7 guns, and 18 AFVs (including 3 falme-throwing tanks), plus 3 modules of OBA and Air Support.  The defending Germans have 45.5 squads, 8 crews with HMGs, 10 guns, 4 AFVs,  some OBA and offboard mortars, and, of course, a large number of fortifications.  To win, the Soviets must achieve 4 of 5 victory conditions that include controlling most city blocks, controlling the railyard area, controlling two key buildings, and controlling certain bridge entry hexes.  The scenario is only 15 turns long, so it allows for some seriously meaty play without necessarily dragging on forever.

Overall, BK looks like a very interesting product.  It will be of most interest to people who prefer campaign games, but some of the scenarios might get play, too.  It is nice to see Lone Canuck aim high in terms of physical production, too–with large maps, die-cut countersheets and the rest. 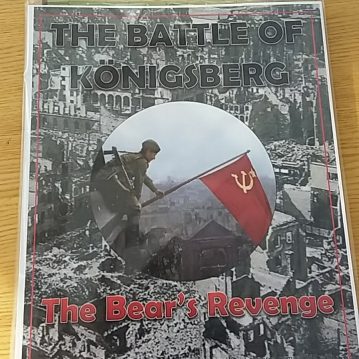