Turretmaker 2: British Western Desert (hereinafter Turretmaker 2) is a counter accessory published by Critical Hit, which has already published a Turretmaker 1. A third, featuring Americans, would later be published in CH Annual Issue 3.

Specifically, this product is a set of 140 1/2″ diecut counters (including 120 British turret counters and 20 markers) representing tank turrets for British/Commonwealth AFVs that fought in North Africa.  In official ASL, of course, AFV turrets are represented by generic turrets on white markers for use by every nationality, with a Buttoned Up version on one side and a Crew Exposed version on the other.  Some third party publishers have gone a bit further, creating nationality-specific turret counters (green for Americans, etc.).

In some ways the Critical Hit counters are better than the Countersmith Workshop counters, but in some ways they are worse.  Overall, the physical quality of the printed counters is better with the CH counters.  However, the Critical Hit counters are only 1/2″ counters, not 9/16″, and furthermore, they pretty much contain all AFV-related information (except for a few very information dense vehicles, such as Grant tanks) rather than just some AFV information.  So, in essence, these counters are smaller but complete AFV counters designed to placed on top of of AFVs.  The combination of more information on the counters, combined with the counters being smaller, makes for distinctly crowded and hard to read counters.  Indeed, even seeing the CE and BU indicators on the backs and fronts of the counters is so difficult that Critical Hit had to make all the BU indicators red in color (by the way, the BU side is on the back of the counters and the less often used CE side is the front of the counters).

The other major drawback is that so few different vehicles are represented.  The countersheet contains 20 Stuart I counters, for example, and 24 Grant counters.  According to Critical Hit’s website, these counters are “keyed” to two recent desert modules by Critical Hit:  Gazala Monster and El Alamein Monster.  However, as few ASLers will even own either of these modules, the small countermix here will make it difficult for even those people who like the counters to actually find ways to use them.

In all likelihood, it would be easier to pick up a regular (i.e., larger) AFV counter to check one of its values than to pick one of these counters.  The design of these counters was probably not very optimal.

Turretmaker 2 also comes with two scenarios, thrown in as added enticement to purchase.  Despite this accessory product being tied in with the Gazala and El Alamein games, the scenarios are ordinary geoboard scenarios that seem to be modified from scenarios appearing in an earlier CH product:  Afrika Korps: Second Time Around. 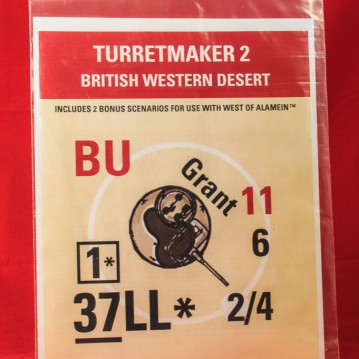