The 1st edition of the ASL Rulebook (which appeared in December 1985, months after Beyond Valor in June 1985) came in a three ring binder, which itself fit into a matching slipcase.  The thick rules were printed in full color and included Chapters A, B, C, D, and H, as well as Chapter N, the “Armory” section, which included (not very readable) black and white depictions of the countersheets.  The idea behind a three ring binder format was that rules pages containing errata could be entirely replaced by new pages with the correct information; the rulebook came with coupons redeemable for future errata pages.  However, eventually this idea was discontinued, and errata pages were issued in later “core” modules.  This means that used copies of the 1st edition rulebook may have some, none, or all of the various errata pages issued.   Additionally, Avalon Hill planned to add more chapters in future modules (such as a chapter on desert warfare, a chapter on the PTO, etc.).  A three-ring binder could easily accommodate a “living” rulebook.

When the ASLRB first came out, it was quite remarkable.  Full color rules pages were unheard of in wargaming–but so too was such a long and complicated set of rules.  Overall, the rules were excellent; later errata pages or new versions of the rulebook simply clarified or enhanced concepts already existing in the original set of rules.  It was these rules that made ASL one of the most successful and enduring board wargames ever.  Naturally, over the years there was errata–inevitable for such a complex game–as well as many clarifications that had to be issued.  Nevertheless, the rules held together very well and even today the 1st edition rules are not truly obsolete (though the 2nd edition rules are considerably more desirable because of clarifications and errata).

Errata pages are distinguishable from original pages because they have copyright dates (the year they were issued)  on them. 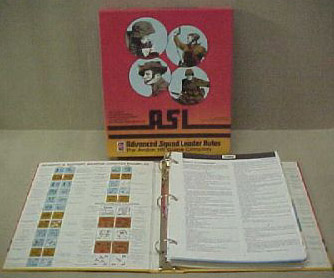