“Arnheim 1944” is one of two sets of dice released by Battleschool to commemorate Operation Market-Garden and, more to the point, to capitalize on the release by MMP of Decision at Elst, an ASLSK historical module on part of that battle.  The other dice set is the 43rd Wessex Division set.

The Arnheim (the German spelling of Arnhem) set consists of two 5/8″ (16mm) custom precision dice, one white and one black.  The black die has its “1” face replaced by a silver-foil image of the Nazi eagle clutching a swastika, the year 1944, and the word “Arnheim.”  This seems derived from some sort of German campaign medal for the operation.  The “2” face and the “3” face also have small “ROF” squares to help players remember ROF.

The white die has its “1” face replaced by a black, white and red German cockade.

Obviously, this set is designed for a German player, with the other set oriented towards a British player.  The set’s release roughly coincided with the release of Decision at Elst, though a German player could conceivably desire to use this with any of the other various Market-Garden themed ASL releases available.

The one problematic aspect of this product is its inclusion of a swastika (which, in addition to being undesirable for many people, would make this product illegal in Germany). 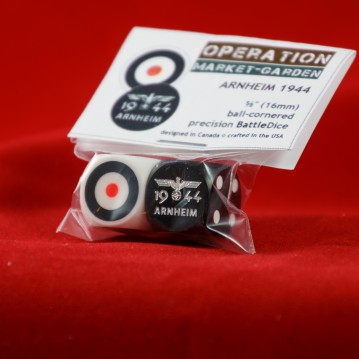