Contents:
64-page magazine, with 16 scenarios as pages of the magazine

MMP released ASL Journal Issue Seven in 2006; few people ever thought at the time that they would have to wait nearly four years before seeing another issue of the journal.  ASL Journal Issue Eight (J8) only came out in early 2010.  ASL production was pretty slow for much of the mid- and late-2000s, as MMP concentrated on other areas (and on the ASL Starter Kit), to the detriment of ASL.

When J8 finally did debut, at least it was a bit larger than previous issues, with 64 pages and 16 scenarios, though no “extras” or “bonuses.”  The article content includes a couple advertisements-as-articles for ASL products, including a rather amusing “preview” of the near-vaporware Finnish module, Hakkaa Päälle–amusing because, four years later, the module still has not been released.  There are a couple of scenario analyses, a rules article on overruns, and a popular article for beginning/novice players by Mark Pitcavage, dubbed “The Agony of Defeat:  Why Bad Things Happen to New Players.”  One of the most interesting articles provides contrasting analyses of J113 (Maczek Fire Brigade) by two excellent ASL players, Bret Hildebran and J. R. Tracy.

J8 comes with 16 scenarios, though of these 6 are reprints from third party publishers.  Several of the reprints are from the highly regarded Swedish ASL scenario pack series Friendly Fire; these, combined with original scenarios by Swedish designer Ola Nygårds, give the issue a certain Scandinavian flair.  Certainly the above-mentioned J113 (Maczek Fire Brigade), a Friendly Fire creation, is an excellent scenario that deserved enshrinement in the pantheon of “official” ASL scenarios.

Of particular note is the presence of three additional scenarios for Valor of the Guards:  VotG19 (Cellar Dwellers), VotG20 (Terror at Twilight), and Votg21 (Defending the Voentorg).   That last one is a somewhat novel three-part scenario in which three small actions are combined into one.  Fans of DASL will no doubt appreciate the two DASL scenarios included in Journal 8:  J123 (Charging Chaumont) and J124 (Cobra Kings).

Overall, there is a very nice mix of small, medium, and large scenarios (though no very meaty ones).  Many are nicely tournament-playable.  Two scenarios use OBA (plus another that places a bit of OBA SMOKE); no scenarios use Night or Air Support rules.

J120 (Ishun Tank Traps) is a tournament-sized East Front scenario with a very interesting twist:  the German player may create 6 hidden tank trap hexes that AFVs can potentially fall into.  J125 (Everything Is Lost) is that rare geomorphic map scenario with Sewer Movement (for aficionados of reeking tunnels).

Overall, the scenario content is good and J8 is worth getting, though it can hardly be said to have been worth a four-year wait, especially without extras. 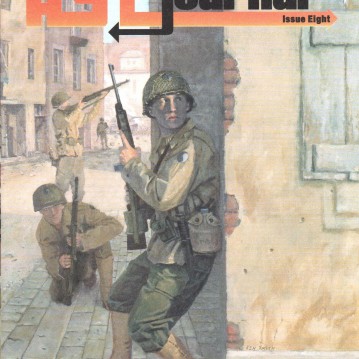