The seventh iteration of the ASL Journal (J7) sports another excellent cover by Ken Smith and is otherwise a fairly standard and unremarkable issue of the Journal.

The only “extra” in the Journal is a Starter Kit geoboard, board v, which is part of ASLSK3, but was apparently included in J7 because a scenario, J106 (Marders Not Martyrs), requires it.  This was the first use of a Starter Kit board for an official “full” ASL scenario, but it would not be the last.  The board itself is a rather nondescript board with a few one-level hills, a few scattered patches of woods, and a largish grainfield in the middle.

There’s not too much to say about the article content, because so much of it is taken up by a huge “historical” article on the British, part two of an article that also dominated ASL Journal Issue Six and was certainly not worth the huge amount of space that it took from both issues.  There is only one substantial gameplay article, an article on HIP tactics by Mark Pitcavage, plus a short article on Commissars by Bruce Probst and a scenario analysis from Operation Veritable by Oliver Giancola.  There is also a “historical” article by Steve Swann and a purportedly humorous article on “Feline Off-Board Artillery.”

This issue was also infamous for introducing a bit of official errata which suddenly declared that a unit in a Bridge hex was subject to an additional -1 TEM when fired upon (in addition to any FFMO or FFNAM).  The clamor and controversy that this ill-considered piece of errata raised caused MMP to retract it in the following issue.

J7 comes with 12 scenarios, though the numbering is a bit confusing because one of them was declared a “missing” scenario from Armies of Oblivion and thus numbered 122 rather than Jxxx.  The emphasis is on tournament-sized scenarios; almost every scenario is small or medium-sized, with only one that could be considered large.  Three of the scenarios are reprints of scenarios that originally appeared in the French ASL magazine Le Franc Tireur.

As one can see, every scenario is either an East Front scenario or takes place in the Balkans between Croatians and partisans.

The best scenarios in the J7 are two reprint scenarios designed by Xavier Vitry and originally published in the French ASL magazine Le Franc Tireur:  J102 (The Yelnya Bridge) and the classic J103 (Lenin’s Sons).  Less balanced but still fun is another such reprint, J104 (Flanking Flamethrowers).  Also good is 122 (Extracurricular Activity). Most of the other scenarios in J7 are lacking in either balance or fun/interest level or both.

Overall, this is not one of the better Journals. 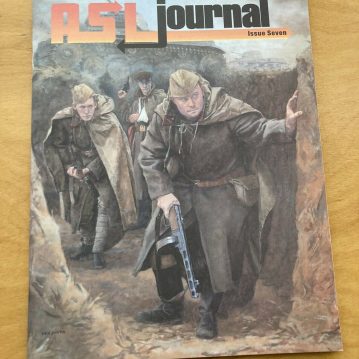