ASL Journal Issue Three (J3) followed on the footsteps of two highly successful previous issues of the Journal.  At 80 pages, with 30 scenarios, J3 is the largest issue yet produced, it continues the successes of the previous two issues.

First, it should be noted that there are no “extras” or “bonus” materials, such as rules pages or mini-HASLs.  However, there are extra scenarios or campaign games for a wide variety of HASLs.

The article content is not as good as previous issues, with  too much “historical” material and not enough gameplay articles (though there is an interesting little article on playing the Japanese by Brian Youse).  One of the few gameplay articles deals with the hardly-ever-used subject of using AA guns (against actual aircraft).

J2 does include a new SASL mission, JM1 (Hoch! Hoch!), a commando mission for the British taking place during the Salerno landings. It also includes a new Kampfgruppe Peiper campaign game, KGP CG IV (Prayers in the Dark), with 4 campaign dates.

With 30 scenarios, no one can deny that J3 does not provide a lot of play opportunities.  The scenarios include a variety of actions, including an entire scenario pack’s worth of Norway scenarios designed by Philippe Naud and other French designers.  The scenarios are not scattered throughout the magazine, as with earlier issues, but conveniently located in the center of the magazine, where they can be easily removed.

Three scenarios–J52 (Dress Rehearsal), J53 (Setting the Stage), and J54 (Showtime)–all designed by Pete Shelling and set at Kursk–can be combined for a sort of linked-scenario campaign game, for which rules are provided.

Although the issue does contain some dogs, some of the scenarios originally thought by players to be unbalanced when the magazine was first released have turned out over time to be more balanced than was initially thought.  In actuality, J3 contains a real wealth of fun ASL material, even if it has no maps or counters. 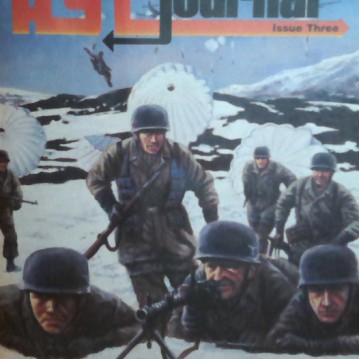