March 2011 marks the 5th year in a row that the organizers of the March Madness ASL tournament in Kansas City have released a limited edition scenario pack intended for attendees at their tournament.  This year saw the release of the Texel Pack, a small pack of 7 scenarios, only 75 copies of which were allegedly printed.

Each March Madness pack has been themed and this year is no exception; the theme for 2011 is the little known (but fascinating) fighting on the Dutch island of Texel at the tail end of the war in April 1945, when a battalion of Georgian Osttruppen on the island mutinied and tried to capture the island (with some help from Dutch citizens).  The rebellion, however, was unsuccessful, with the Germans landing naval troops on the Island that slowly tracked down and eliminated most of the mutineers over the course of the next two weeks, although scattered fighting occurred even after the German surrender on May 8, 1945.  Allied troops finally landed on the island on May 20, 1945, ending the conflict.   It is nice to see this interesting little war appear in ASL (this writer some years ago did research on the fighting on Texel with an eye to designing scenarios around it, but never finished them).

The scenarios use Axis Minor counters to represent the Georgian mutineers; essentially they are treated as late war Romanians (including Panzerfaust usage).  German forces range from various low ELR garrison and service troops to the better armed and elite (but still low ELR) naval infantry troops that landed to suppress the uprising.  There is a certain lack of consistency among the different scenarios; in some scenarios the Georgians are referred to as “Elements of the Georgian 822nd Battalion” while in others they are referred to as “Elements of the Rebelling Georgian 822 Battalion” or “Elements of the Rebelling Georgian 822nd Battalion.”  Germans units are sometimes referred to as the 163rd Marine Infantry Regiment but also sometimes as the 163rd Naval Infantry Regiment.  There are other errors throughout as well, such as “Kamfgruppe” for “Kampfgruppe,” that indicate some more proofreading was required on the pack.

The scenarios are a decent mix of small, medium, and large-scale actions.  Most of the scenarios, as is suitable for a tournament pack, are tournament-sized (but see fortification comments below).  Three scenarios (almost half the pack) have OBA; no scenarios have Air Support or Night rules.

Significant fortifications (pillboxes, trenches, fortified buildings, Wire, roadblocks, mines, AT Ditches, sangars, armored cupolas, and/or foxholes) appear in every one of the scenarios.  One scenario, MM12 (Texel Airport), features 37 fortification counters and a minefield of 48 factors (plus 8 dummy minefields), but only 15 squads on the defending side!  Actually, fortifications outnumber defenders in most of the scenarios.  Two scenarios actually feature 9 or more fortified building locations.  There aren’t any scenarios where players will be able to set up very quickly and start playing.  The ubiquity of fortifications in the Texel Pack is one of its most distinguishing characteristics (not necessarily a good thing).  Another characteristic is instant victory conditions; 4 of the 7 scenarios feature instant victory conditions for the attacker.

Some of the scenarios just don’t seem that appealing.  MM14 (Going to Californie), for example, is a two map scenario (Boards 42 and 52) pitting 15 German squads, well armed, against 4 Georgian squads and 4 half squads.  To win, the Germans must inflict at least 6 CVP more on the Germans than they themselves lose.  Because the Georgians have no firepower to speak of (all their inherent firepower and SW added together is only 20 FP points, compared to 88 for the Germans), they can’t stand and fight.  However, the Germans enter from off-board and the Georgians have the entire map area for set-up.  They can set two squads (and any SMC with them) up HIP, while the remaining force can set up HIP if they set up in a fortification (which will themselves be set up HIP).  As a result, almost the only viable tactic for the Georgian forces is to split up, hide, stay hidden as long as possible, and play keep away from the Germans as much as possible.  It might also conceivably be possible to use some of their 16 fortification counters (and plentiful minefields) to set up a small bastion somewhere.  Meanwhile, the Germans probably must deploy as much as possible to send out forces to span as much of the mapboard as quickly as possible in order to spot all the fortifications and flush out any HIP units in them.  Even then they would have great difficulty finding the other two HIP Georgian squads (which would presumably have the two Georgian leaders with them), simply because there are so very many potential places to be HIP on those two mapboards.  If they can’t find them, then they only have 8 Georgian VP total that they can find, which would mean that they would have to find and kill almost the entire remaining Georgian OB, without suffering any casualties themselves, in order to win.  Granted, their most likely chance of casualties is only through minefields, but still.  It doesn’t sound very fun for either player.

Because of the nature of the scenarios, the pack is likely to appeal mostly to collectors. 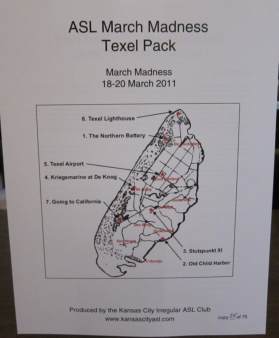