ASL News began as an ASL newsletter of Belgian origin, eventually turning itself into a full-fledged magazine.  It lasted for 31 issues before expiring in 1996.  During this early era, along with Tactiques, ASL News was one of the most important third party publishers of ASL material.

On this website, ASL News is covered in two different ways.  This entry covers the period of ASL News as a xeroxed newsletter–essentially, its first 26 issues.  It also covers the ASL News Special Oldies series, which were a series of compilations of articles and scenarios from the early issues of the magazine.  However, ASL News Issues #27-31–i.e., the period in which ASL News was issued as a printed magazine–each have their own entry.

ASL News began as a quarterly newsletter in the late 1980s, but as ambitions and audiences grew, ASL News grew, too.  In its last few years of existence it was a quite nicely produced black and white magazine.  Philippe Léonard was the mainstay behind the publication, but he had plenty of help, especially from Pedro Ramis, Jean Devaux and Claude Scref, but also from a host of other contributors, mostly French and Belgian, but also including Brits, Americans, Italians, and others.

The production values of ASL News never approached those of Tactiques or Le Franc Tireur, but in its later issues became better than those of the average newsletter (that is, from those days before sophisticated desk-top publishing became inexpensive and color newsletters could be distributed via PDF or color inkjet printers).  The magazine was in English (except for some French articles in earlier issues), but it was more a functional English than anything else.  Even leaving aside the language issues, the quality of the articles varied widely.  On the whole, the article content does not compare favorably to that of some of the other ASL magazines, though it does compare favorably to some of its newsletter competition, such as On All Fronts.

As ASL News grew in size, it became more difficult to produce.  Its publication schedule dropped to biannual, and there was a very long delay between Issue 30 and Issue 31, as Léonard experienced difficulties with his printer.

Finally, Léonard made an arrangement with American third party publisher Critical Hit for that company to take over ASL News’ subscription obligations and to give Critical Hit the right to reprint ASL News scenarios.  This resulted in several scenario packs (the first several Euro-Packs) and one magazine issue (Scroungin’ ASL News, a “best of” compilation).  Several of the contributors for ASL News, including Pedro Ramis and Ian Daglish, would also become frequent designers for Critical Hit.  Others, such as Jean Devaux, would move on to the French ASL magazine Le Franc Tireur.  Unfortunately, Léonard had no way of knowing at the time that this decision would lead to 20 years of Critical Hit constantly revising, renaming, and reselling these scenarios.

In addition to the “regular” issues listed below, ASL News reprinted some of its older articles in compilations it called “ASL News Special Oldies.”

For quite some time, scenario layout was crude and haphazard.  However, it gradually improved to some degree.  ASL News scenarios were not initially numbered.  However, ASL news, around issue 23 or so, retroactively numbered them; those are the numbers used here.  Without physical copies of every issue, determining for certain what scenarios belong with what issue is very difficult, and certain trusted on-line sources of this sort of information are riddled with mistakes where ASL News is concerned.  Therefore, unless content can be verified from a physical copy, “guesses” at which ASL News scenario go where are avoided here.

Léonard firmly fell into the “historicist” camp of scenario design and frequently criticized the historical accuracy of other ASL scenarios and products.  He aspired to make ASL News scenarios as accurate as possible.  It is hard to judge to what degree he might have succeeded.

When number of pages is listed below, take it as an approximate number.  A number of copies of ASL News are just that–copies of the original–and the number of copies probably significantly outweights the number of originals out there.  As a result, sometimes certain pages may not be copied, or get torn away by wear and tear, etc.  Every attempt was made to be accurate, but this is old, obscure stuff.

Over time, English-speakers increasingly wanted back issues of ASL News, so the decision was made to compile much of the English language content, and many of the scenarios, into three compilation issues, dubbed ASL News Special Oldies #1, #2, and #3.  Later, a “double issue” Special Oldies was released, #4/#5, which contained French language content.  Finally, another English language “double issue” saw print, #6/#7, which compiled materials from issues #15-20.

Thus the Oldies contained a total of 31 reprinted scenarios from issues #1-20 (which had 35 scenarios total). 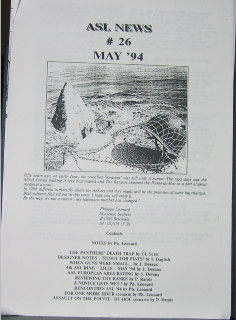