The largest ASL tournament in the world is also the oldest, ASL Oktoberfest (abbreviated and prounced ‘ASLOK’).  The year 2005 marked the twentieth year that ASL Oktoberfest was the scene for ASL fanatics from around the globe, and simply showed how much northeastern Ohio had become the Mecca for ASL (ASLOK was held in Youngstown, Ohio, for the first several years, but for many years has been located in Cleveland).

ASLOK grew from a weekend ASL tournament to a monster marathon of ASL events, lasting 8 days and including a main tournament (the ‘Grofaz’), a large number of mini-tournaments, an annual U.S. vs. the World competition, and more.  New ASL products frequently debut at ASLOK, and designers from all over bring copies of their works in progress to show off, playtest, and create buzz about.  It is anything and everything that an ASLer could ask for.

To commemorate ASLOK’s long and hallowed place in the ASL world, ASLer Rich Jenulis decided to put together a collection of tournament-sized ASL scenarios featuring the talent of local Ohio ASLers.  Among the luminaries who contributed in some way to his project were many names with which any veteran ASLer would be familiar, including Bill Sisler, Dave Ginnard, Wild Bill Hayward, Mike Faulkner, Bret Hildebran, Pete Shelling, Rick Troha, Mark Nixon, and many others.

Most of the scenarios are original (the two Pete Shelling scenarios are reworked versions of scenarios that originally appeared in the newsletter Forward Observer) and represent a wide range of actions:

The scenarios are generally well laid out and attractive, with a lot of attention to detail (including listing historical sources for a number of the actions).  Several of the scenario cards, though, are very “busy,” and give the impression (regardless of the reality) that those scenarios are quite complicated and involved, with the possible result that some ASLers may choose not to play them. Moreover, some of the scenarios are, in fact, complicated.

A number of the scenarios feature interesting SSRs, from variable reinforcements to armed civilians.  One scenario has NOBA, two have OBA, and one has Air Support.  One scenario, ASLXX7 (Slaughter at Shanderovka), has rules to accommodate 3 and 4 player games.    The scenarios have a good size mix, including 3 small, 4 medium, and 3 large actions.

Overall, the scenarios have not received much play and those that have been played the most seem rather unbalanced.  However, a couple of the scenarios, such as XX9 (Friendly Fire) and XX8 (Counterstroke at Carentan) are wroth playing.

Only a relatively small number of copies of this pack were printed, so it may become a collector’s item in years to come. 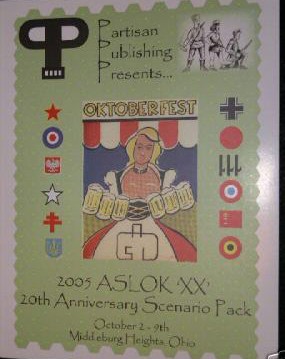