Battle at Best is a historical module published by Critical Hit in 2019 that features combat in September 1944 in the Netherlands during Operation Market-Garden. Best is a village  to the northwest of Eindhoven; its bridge over the Wilhelmina Canal was a secondary objective of the 101st Airborne Division, as holding it would give the Allies an alternate route north if needed.  The 101st spent several days of hard fighting trying to take the village and its bridge, but were largely unsuccessful (the bridge was eventually blown by the Germans and the village itself was not taken until a month later, by the British. The title of the module probably is derived from the S.L.A. Marshall book of the same name.

Critical Hit rarely provides details about its products or their contents (most of the description of this product on Critical Hit’s website is actually just a historical description plagiarized from this website). However, he module contains a historical map that is formed by assembling 9 glossy 12″ x 18″ heavy paper/light cardstock map panels. Assembling so many map panels is definitely a pain, although most scenarios don’t use the entire map area.

The largish map is competently rendered but a bit drab, dominated by muted shades of green. Critical Hit maps of this era often have a problem with building graphics and this product is no exception. In the village of Best, for example, there are multiple different styles of building artwork thrown together in an unattractive mishmash. Buildings of one style (X42-43, for example) are well-rendered, while buildings of another style (BB43-CC-43, for example) have blurry interiors. Some buildings (W41) have pixelated exteriors.  A few (Y40, W39) are strangely faded and ghost-like.  It looks as if none of these graphics were created for this map but were rather spare  bitmaps from various previous projects that were just thrown together to form the village of Best. Ugh.

Parts of the map are dominated by thick swathes of wood (criss-crossed with roads, which actually represent fire breaks), while other parts contain village terrain like Best, but much of the map is fairly open country dominated by different types of water obstacles, including ponds, streams, canals, and irrigation ditches. The Wilhelmina Canal is bordered along its length by what I take to be levies (represented as level-1 terrain).  The nature of this terrain can present some unique tactical challenges that some ASLers might find interesting.

The rules are minimal, which is typical for a number of Critical Hit products of this era (possibly from light research). Most of the key rules–about a page and a half–lay out the terrain types. There’s also about 3/4 of a page of Chapter H style rules (the rules pages in color but presumably a result of some error, all German counters seem to be rendered in grayscale). The other rules are pure fluff thrown in just to pad the rules; Critical Hit constantly adds these rules in this manner: “optional” Cargo Trailer rules, gratuitous rules for Bayonet Charges (“borrowed” from Kinetic Energy), and gratuitous rules for Marching Fire (also “borrowed” from Kinetic Energy).  Ugh.

Critical Hit claims the product comes with a 1/2″ countersheet (280 counters) featuring German Infantry/SW, a 1/2″ countersheet (280 counters) featuring U.S. Infantry/SW, and a 5/8″ half-countersheet (88 counters) featuring U.S./German vehicles. However, in the copy examined by Desperation Morale, only one of these sheets (the U.S. sheet) appeared. Apparently the product was missing most of its counters. The U.S. sheet is not in standard U.S. green but rather a Critical Hit “variant” dark olive green, which is difficult to read, as the counter values are printed in black, not white (generally, in wargaming, black factors are printed on light-colored counters and white factors on dark-colored counters).

Best comes with 9 scenarios, one of which, #9b (Battle at Best) is a 38-turn “monster” scenario using the entire map that is included in lieu of any campaign game.  Five of the 9 scenarios are large or very large in size, while two are medium-sized and two are small.  OBA is present in 5 scenarios (Critical Hit likes to put lots of OBA in its historical modules), Air Support in 2 scenarios, and (some) Night Rules are used in 1 scenario. The historical descriptions are variously cribbed/plagiarized from online sources.

There are no credits listed for developers or playtesters, which is usually a very bad sign for Critical Hit products.

The module is priced at $99.95, which is quite expensive.  Essentially what it has going for it is an interesting, though not necessarily particularly attractive, map. 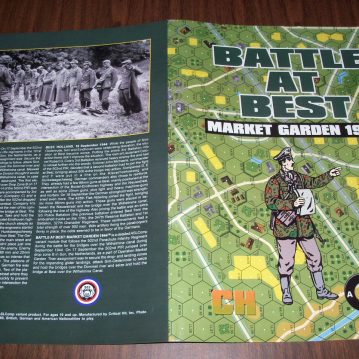