One of the many scenario packs published by the proliferous Paul Kenny, the Battlin’ Bastards of Bataan Pack (BBB) features scenarios set on the Bataan Peninsula in the Philippines, where brave but outgunned American and Filipino troops stymied Japanese offensives for months in 1942 before they were finally starved into submission.  It was one of the most interesting and heartbreaking campaigns of World War II.

Although Kenny gets some of the more obscure details of the arms and ordnance of the campaign correct, the research may not be as complete as one would like.  The commander of a tank group (almost regiment sized) is identified as a company commander, for example, and while several scenarios feature American Stuart tanks, they do not reflect the fact that the tanks had no HE ammunition, only AP, and that one of the machineguns had to be removed in order to fit a radio.  One scenario features naval troops converted into infantry, but represents them as elite early war USMC, whereas in fact they were so incompetent as infantry that the Japanese thought they were some sort of strange suicide unit; a diary found on a dead Japanese soldier described the sailors as a “new type of [American] suicide squad…which thrashed about in the jungle wearing bright-colored uniforms and making plenty of noise, would attempt to draw fire by sitting down, talking loudly and lighting cigarettes.”  Another scenario features the “43rd Infantry Regiment, 21st Division,” but the 43rd Infantry Regiment was part of the 41st Division (each Philippine Army Division had regiments numbered similarly, so the 21st Division had the 21st, 22nd, and 23rd Regiments, for example).

The scenarios are a good mix in size.  Most are tournament size; there are 4 small scenarios, 3 medium scenarios, and 3 large scenarios.  One scenario is almost all armor; one is a Night scenario; one scenario has OBA.  Several of the scenarios have interesting situations (for example, FE34, Go Down Fighting), but are insufficiently balanced.  One scenario, FE26 (Precious Minutes) pits 13 first and second line Japanese squads (total firepower, including MG, of 54) on the attack against 12 Filipino squads (total firepower, including MG, of 60, not counting the 2 U.S. 75mm artillery pieces!).  Even without playing the scenario, one would have to wonder if the Japanese have a realistic chance against a competent Filipino player, and the answer upon trying it is that they do not.

Unfortunately–because the subject matter is excellent–this is one of the poorer of the Fanatic Enterprise packs. 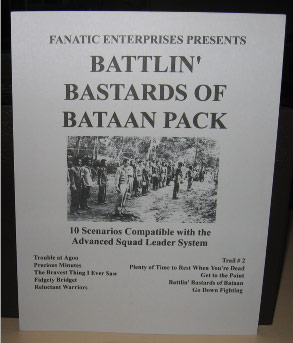