The Blood Reef: Tarawa Gamers Guide (BRTGG) is one of the more unusual ASL products around, essentially a loving valentine to a niche ASL item.  It was developed by a group of Blood Reef: Tarawa fans, mostly from the northeast (Tom Lavan, Paul Sidhu, Jim Torkelson, Oliver Giancola, and Carl  Nogueira), who wanted to make the game more accessible and enjoyable to other ASL players.  As they put it, “BRT is a rarely played gem that deserves a much better fate than being an out of print niche product.   It is our hope and belief that the resources presented here will allow more players to give the scenarios and CGs a try.”

Why would BRT amass a group of followers so dedicated to the game that they would want to put together a Gamers Guide?  After all, even the far more popular Red Barricades was never honored in this way.  There are several reasons why BRT, even if it may not be for everybody, can definitely create an intense loyalty in some people.  First, it is one of the only official full (rather than mini-) HASLs that features the Japanese (its only real competition is thus Operation Watchtower).  Second, it features the U.S. Marine Corps, a subject of interest to some people.  Third, it is almost the only full-sized official HASL to actually feature island fighting in the central Pacific (the only conceivable alternative is the Gavatu-Tanambogo mini-HASL of ASL Annual ’93b).   Fourth, it is the only amphibious action available as a full-sized official HASL, which is no small matter to ASLers who want to hit the beaches.   Finally, but hardly least in importance, it is the only full-sized HASL, period, that features an entire military campaign, soup to nuts.  Players actually invade or defend the entire island–not some small segment of a front line or some small section of Stalingrad.   They control the entire battle–an incredibly rare experience for a tactical wargame like ASL.  Put all these things together and it is perhaps no wonder that BRT would amass a group of fans dedicated enough to put together a guide for their fellow gamers.

Of course, creating a guide is one thing.  Getting it published is quite another.  The BRTGG team submitted their guide to MMP sometime in late 2005.  In January 2006, MMP announced its likely appearance in print later that year.  In reality, though, the manuscript presented MMP with a bit of a quandary.  With impeccable timing, the BRTGG arrived just as the last 200 copies of BRT were in the process of being sold.  The game itself was out of print by early fall 2006, ne’er to be reprinted.  One could easily ask what the point would be of printing a guide  to an out of print game?  All it would do would be to drive up the price of  used copies on E-bay.  On the other hand, the manuscript seemed like a “quick and easy” finish and would deliver a product in what had essentially been an ASL drought.

In spring 2006, MMP announced that BRTGG was up for pre-order.  The price was sweet:  $16 list price, only $12 for a pre-order.  The number of pre-orders required before the item would be printed, however, was not so sweet:  it required 1,000 pre-orders, quite a high number for MMP at the time.  Was MMP hedging bets?  It certainly was.  “We have plenty of doubts as to the viability of this as a product,” MMP honcho Brian Youse admitted in April 2006.   As a result, though ASL products listed for pre-orders usually make their required minimum number of pre-orders in a matter of weeks (sometimes less), the high pre-order requirement combined with the niche nature of the product itself meant that it took a year (May 2007) before BRTGG made its pre-order number.

Even then, MMP was not exactly itching to get the product out the door (especially with that low price) and it became one of several ASL items at that time languishing in pre-printing purgatory–these were years in which MMP was considerably constipated.  Reportedly, rules interpretations issues that appeared during the editing process also caused delays.  In any case, it took over three years from the time it made its pre-order number for the magazine to actually appear in print in June 2010.  In all likelihood, its creators never thought the odyssey would be so long.

At 68 pages in length, the magazine has a lot of content.  Most of it can be divided into two broad categories:  1) helping people learn BRT, and 2) the tactics and strategies of BRT, especially the big campaign game, CG III.

One article designed to ease people into BRT is Tom Lavan’s “Learning the Ropes:  A BRT Rules Method,” which attempts to provide a sort of programmed instruction curricula using the different BRT scenarios to introduce certain rules with each scenario.  The idea is for would-be players to read limited sections of the rules, then play a BRT scenario that uses them, and builds on previous scenarios.  It is not clear, though, that a substantial number of people would actually attempt this method.  Perhaps more useful is that the article also lays out the specific Chapter E/F/G/H/T rules sections that players will need to familiarize themselves with in order to play the Campaign Games.   The article also helpfully explains how particular ASL concepts (hindrances, immobilization, bog, etc.) work with regard to the BRT-specific terrain and rules.

Also quite useful for people attempting the BRT CG experience is an illustrated example of play composed by Jim Torkelson that takes a section of the initial CG scenario for CG III and takes them through an entire USMC turn (this includes LVTs).   Every bit of the turn is described, so it is a very useful example of play (though more illustrations might have made it even more helpful).

For ASLers who do not need to be taught the ropes, BRTGG offers more advanced fare, centering around the largest campaign game, CG III (the holy grail for BRT fans).  In one of the longest and meatiest articles in the entire magazine, “Heavier than a Mountain,” Jim Torkelson provides an analysis of the campaign game from the Japanese perspective, in particular analyzing each potential landing area, as well as troops and weaponry.  Paul Sidhu’s “Prepare to Disembark” looks at USMC strategy for the same campaign game, though in far less detail.  Carl Nogueira takes up the cudgel, to a certain extent, with “A Day at the Beach,” which is basically a detailed AAR of a CG III day one campaign date from the USMC perspective.

Narrowly focused articles include Paul Sidhu’s “Sticks and Stones,” which examines naval bombardments (from a tactical rather than pedagogical perspective, though it does include an example); Oliver Giancola’s “Sandy Breaches?”, which looks at the tactical puzzles that seawalls pose for the USMC; and Jim Torkelson’s “USMC Tank Tactics,” the nature of which is probably self-explanatory.  In a separate article, Jim also provides advice on LVTs.

Oddly, the first two CG in BRT are ignored by the magazine, as are most of the scenarios.  One exception, though, is BRT4 (Rikusentai), to which an article by Tom Lavan, “Building a Porcupine:  Constructing a Japanese defense for BRT4 Rikusentai,” is dedicated.  The magazine also includes a couple of (thankfully brief) historical items, and additional play aids and charts.  Lastly, it includes a BRT-dedicated set of official Q&A rules clarifications.

The magazine is in full-color, including illustrations, though several of the articles would have benefited from additional illustrations.  A more serious issue, perhaps, is the physical nature of the magazine, which was printed on light glossy paper, even the cover.  As a result, the magazine itself is somewhat fragile, and the cover itself provides no protection to the magazine.  Even the dampness of a slightly sweaty hand can cause the ink to smear.  As a result, owners will have to take care to protect this magazine from wear and tear and will probably want to purchase some sort of plastic holder for it.  This is rather unfortunate, in that this magazine, by its very nature, is likely to get more use than a typical magazine.  It would be referred to often and perhaps even kept by the gaming table during sessions.  A sturdier construction would have been very welcome (ASL Journals, for example, tend to hold up well to wear and tear).   More broadly, the magazine is an example of MMP’s growing use of glossy paper, which is something that at least some ASLers definitely don’t care for.

With its low price and intellectually weighty contents, obtaining the BRTGG should be a no-brainer for all owners of BRT.  It adds considerable value to that product and, if BRT has been languishing on the shelf, ought to make people think about giving it another go.  This is a labor of love and it is nice that MMP was able to find a place for it. 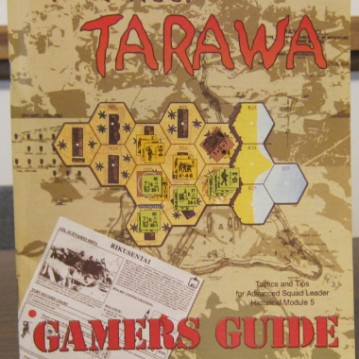