Bloody Buron is the third in Lone Canuck’s series of small historical modules (with more on the way), though in some form elements of this module date back to the late 1990s.  It depicts the battle for the Normandy village of Buron in July 1944 as part of Operation Charnwood, one of Montgomery’s attempts to capture the strategic Normandy town of Caen.  Bloody Buron features two of designer George Kelln’s favorite subjects:  Canadians and Waffen SS.

Like previous iterations of this series, Bloody Buron is fairly bare bones, with a single map, single campaign game, only four scenarios, and no designer’s or historical notes.  The major appeal that it offers is that of a smallish and playable campaign game.  Playing Bloody Buron need not take weeks or months; in all likelihood the campaign game can be finished in a dedicated weekend or two.

With products such as Bloody Buron, the main feature is the historical map.  As with Purple Heart Draw and Ozerekya Breakout, the map of Bloody Buron is a clean and attractive map composed with the software program Hexdraw, though this map is not quite as nice as either of the other two.   The map is a tale of two halves.  One half of the map is dominated by rural farmland, with both grain fields and ploughed fields, as well as a large anti-tank ditch.  The other half of the map contains the village of Buron.  Bloody Buron does not use the full bocage rules but rather uses “Light Bocage,” which is more of a pumped-up Hedge than it is Bocage–a feature that many people may appreciate.

The rules for Bloody Buron are basic and to the point; there are few lengthy special rules (as might be found in, for example, Festung Budapest) and the campaign-related rules are straightforward and traditional.  In many respects, Bloody Buron is a good introduction to campaign games for people wishing to dip their toes into this realm of ASL.  The lack of complicated rules and the short duration of the campaign game make it easy to get into.  The purchase options are relatively limited for both sides, although the Canadians get more toys from which to choose, including Crocodiles.  The only vehicles available to the Waffen SS are Panzer IVs and halftracks.

The one large scenario is BB1 (First Big Fight), depicting the opening of the Canadian offensive.  It uses the northern half of the map, which is as much as one will get with this module without playing the campaign game.  The Canadians start off with 20 squads, 6 leaders and 1 armor leader, 10 SW, and 13 AFVs (as well as two modules of OBA).  The defending Germans have 8 squads, 3 leaders, 8 SW, 3 Guns, and a huge number of fortifications and entrenchments of various sorts.  They also get some OBA.  This scenario takes place in the “rural” half of the map and the main Canadian objective is essentially to cross it.  This is the most interesting scenario of the four.

BB2 (Smashing in the Door) pits 8.5 Canadian squads, 7 SW  (see above), and 3 leaders against 3.5 Germans squads, 2 leaders, 1 SW, 1 Gun, and some fortifications.  The Canadians must capture a bunch of building hexes to win.

BB3 (Haywire Communications) features a Canadian attack with 9 squads, 3 leaders, 10 SW, and 3 AFVs against 4.5 German squads, 3 SW, 1 Gun, and a variety of fortifications.  Once again, the Canadians win by capturing some building hexes.  An SSR decrees that the Canadian player can move his infantry or his AFVs each turn, but not both.

BB4 (Zoot Suit Boys) depicts an attack by 10 Canadian squads, 3 leaders, 6 SW, and 3 AFVs against 6 German squads, 3 leaders and 1 armor leader, 3 SW, 1 Gun, 2 AFVs, and a few fortifications.  The scenario is likely to be pretty dicey, as the Germans only have 4 squads and a Gun for the first 4 turns and the Canadians have a SAN of 3.  One key German unit breaking early on could have a major effect on the scenario.

Because of the small number of scenarios, as well as their limitations, this product really stakes everything on its campaign game.   Players for whom campaign games do not really appeal can safely skip this product; ASLers who truly like campaign games will want this as a matter of course. 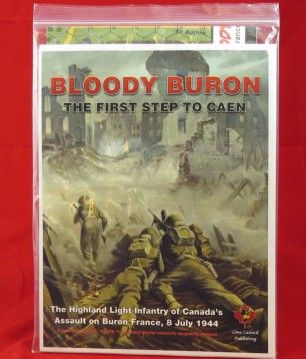