BoB Normandy (BoBN) appears to be an attempt by Critical Hit to cash in on the Band of Brothers marketing phenomenon that has evolved in the wake of the book and mini-series Band of Brothers. However, though its name includes a reference to Band of Brothers (E Company, 2nd Battalion, 506th Airborne Infantry Regiment), and though some of the leader counters reference Band of Brothers personages (Lt Winters, Cpt Sobel, Sgt Guarnare, etc.), it really has nothing to do with Band of Brothers (indeed, only a minority of scenarios even feature the same regiment). Instead, it is a collection of smallish Normandy scenarios featuring the 101st Airborne Division.

The bulk of BoBN consists of 8 scenarios, purportedly new, designed by Ray Tapio. All of them use the Drop Zone Normandy/NP map, which is not a historical map but has generic “Normandy-style” terrain on it. In addition, there are two “bonus” BoBN scenarios to go with the “bonus” Brécourt Manor map. The “bonus” Brécourt Manor map appeared originally in a Band of Brothers associated ATS module (So Full of Fire), published in 2007; it was thrown as a “bonus” into a tiny ASL mini-module, Hürtgen Surprise, in 2008. Now, in 2011, the map is being re-bonused as part of BoBN, with two scenarios, BoBII #1 (So Full of Fire) and BoBII #2 (Brécourt Mop Up), both of which are also re-bonuses from Hürtgen Surprise, apparently slightly tweaked. The other two “free bonus” scenarios are Bonus 1 (Man and Machine) and Bonus 2 (Those Normandy Nights). It is not exactly clear why Man and Machine is being described as a “bonus scenario;” it looks like a normal BoBN scenario, even using that map. The second scenario, though is a reprint of a DASL scenario that originally appeared in Critical Hit Magazine. Often with Critical Hit, nothing is easy to describe.  In any case, this product appears to have more “bonuses” than a Wall Street pirate at the end of the year.

For discussion of the Manor map and scenarios, see the link above.

The BoBN map is a 16 hex by 26 hex map featuring generic “Normandy-style” terrain, with hedges, orchards and scattered buildings predominating. A few slopes are scattered around the map as well. The woods hexes are primarily “stamped” terrain–several pre-created woods images used over and over again, recognizable by their distinct features. The shellhole hexes are also stamps, with the identical “spread” of shellholes appearing time after time.

Unusually for Critical Hit, the map is printed on a glossy paper stock, something Critical Hit has not done in many years. This gives the map a brighter tone than its more muted matte maps have, but adds glare. Many ASL players do not like glossy maps because of the glare issue and a perceived fragility (though this map seems sturdy enough). It is folded as a tri-fold, which means that when folded it is longer than a typical wargame map and requires a long envelope for storage. On the whole, it is a fairly unremarkable map, with no distinctive or interesting terrain. Three scenarios utilize the whole map; the other six use a portion of it.

The countersheet (in typical Critical Hit style, there are two duplicates of a single countersheet) consists overwhelmingly of counters that area already in the system. There are two 1/2″ counters introducing the M5A1 utility hand cart, typically used by airborne and other troops to help haul items such as ammo or a .50 cal MG. However, no scenario utilizes them and there are not any included rules for them, so they are essentially useless fluff. In short, there was no actual need to include any counters in this product.

Of the 9 BobN scenarios, 8 are small in size (the “bonus” scenario, Man and Machine, squeaks in at medium). In fact, one could say that the scenarios are basically tiny in size; the average attacking force in these 9 scenarios has only 8.5 squads. That’s a size that will be too small for many ASL players. Despite their small size, three of the scenarios have OBA. All of them use Bocage rules. The scenarios have few SSRs, allowing players to get in and start playing easily.

The scenarios in general are SMC heavy, at least for the Americans. BoBN#1 (On to La Barquette), for example, features 8.5 attacking American squads. They are accompanied by 3 leaders (including a 10-3 leader!) and two heroes. The defending Germans, by the way, start with only 6 squads (they get two more as reinforcements). They certainly have their work cut out for them, as the American heroes stacked with the 10-3 leader together can provide a -5 DRM to any fire. BoBN#2 (Strayer Forward) features 8.5 attacking American squads, coupled with 3 leaders (including a 9-2) and a hero. BoBN#3 (On to Pouppeville), with 8.5 attacking American squads, also has 3 leaders (including another 10-3) and a hero. And so on; the other scenarios all have tons of American leaders, featuring at least one -2 or better leader and at least one hero. The combination of extreme good leadership and very small OBs means that the scenarios are inherently dicey–one good attack DR and a defender can be decimated. The Germans will pretty much have to avoid stacking altogether, in order to reduce the risk of a devastating lucky shot. In one scenario, BoBN#7 (Tense Moments), the Americans have 7 squads, a 10-2 leader, a 9-2 leader, a 7-0 leader, and a hero; they ALSO have 100mm OBA. The German defenders have 8 squads, including 4 2nd line squads and 3 conscript squads, led by a 9-1, an 8-0, and a 6+1.

As some purchasers quickly noticed, BoBN seems to have had insufficient proofreading. In BoBN6 (Sink’s Orders), for example, the German balance references American Exit VP, but the scenario victory conditions require the Americans to control hill hexes, not exit VP. An SSR says that German reinforcements enter on a turn based on a dr; however, the OB instructions say they enter on Turn 3. Both German and Americans have “optional” reinforcements, but this is never explained.

Overall, BoBN is something of a disappointing product. The map is generic, not historical; some of the included scenarios are re-treads; and the remaining scenarios are all basically tiny scenarios with large numbers of powerful American leaders and heroes. This product may appeal to Normandy and airborne enthusiasts (though there are no air drop scenarios), and may also appeal to those ASLers who like their scenarios all bite-sized, but Critical Hit has done better.

2nd Edition (i.e., DZ Normandy) Comments:  In 2014, Critical Hit released a new version of BoB Normandy, which it renamed (of course) to DZ Normandy.  This edition is quite different from the original edition.

The first change is that all of the Brecourt Manor material (map, scenarios) is gone, as is some of the “bonus” material.  This version contains only one map and eight scenarios to go along with it.  There were 9 scenarios that used the DZ Normandy map in the first edition; the missing scenario is the original Bob8 (Mixed Response).  All of the scenarios are marked as version 1.2.  Despite this fact, the scenario DZN6 (Sink’s Orders) still contains the confusing EVP reference and contradicting German reinforcement reference!  Sloppy.  The scenario cards themselves are a distinct improvement in physical quality over the 1st edition cards, with seemingly better quality printing (and colors!).

The 2nd Edition comes with two small countersheet, neither one of which was created for, nor needed by, this product (this means, by the way, that two of the three counters featured on the front of this product do NOT actually appear in the product).  One countersheet was originally designed for an edition of Kellam’s Bridge; it primarily features American MMCs and SMCs marked with the 82nd Airborne insignia (observant readers will remember that this product, however, features the 101st Airborne Division, not the 82nd).  The other countersheet primarily consists of vanity counters (i.e., ASL players paying Critical Hit to print leader counters with their own names on them).  Thus the counters of the 2nd edition, like those of the 1st, are irrelevant to the product and not needed.

The last change is probably the most notable, and that involves the (remaining) map.  The DZ Normandy map is a smallish (in hexes) non-historical but also non-geomorphic map intended to represent “typical” Normandy terrain.  The new version features the same generic terrain but in all other respects is different.  It is printed on two large sheets of heavy paper that mate (with a slight overlap) to form the map.  The paper is glossy, which results in unwanted glare, but has a brighter look to it that causes the colors to pop.  The graphic themselves have been given a complete overhaul from the original graphics and look much, much better in the new version.  The 2nd Edition version is a map that someone might actually want to play on.  Unlike some other Critical Hit maps released around the same time, these maps are properly folded so that they can be kept in the ziplock bag the product comes in.  The map is larger than the original, with generous-sized hexes, but the small scenarios of DZ Normandy can’t really take advantage of the extra room very well.

Despite the components missing from the original edition, the 2nd edition may be a more attractive alternative, thanks to the map.  Like all Critical Hit products of this era, it is significantly overpriced (at $39.95), so it is only worth getting at a substantial discount.

3rd Edition (Band of Deluxe Brothers) comments:  As Desperation Morale has frequently pointed out, Critical Hit is heavily dependent on a business model that involves constantly re-releasing its older titles with different names and usually relatively minor changes.  Whereas most wargame companies never reprint their games, do so rarely, or only do so for their most popular titles, Critical Hit constantly re-issues its entire catalog, but almost always with a different look and title, in the hopes that players and retailers will buy new copies of a product they actually already own.  It should thus be no surprise that Critical Hit has done this yet again with its BoB Normandy product, issuing it a third time with a third title.  One might think from the product art that it is actually titled Band of Brothers Deluxe, but the word order was very deliberate–as “Band of Brothers” is a trademark of HBO and Critical Hit cannot risk using it.

As the title suggests, this iteration of the product has large hexes.  Critical Hit threw out the original map–whose only saving grace was its small and convenient size–and replaced it with a map that must be assembled from 8 12″ x 18″ glossy heavy paper map panels.  The hexes on these BoDB map panels are incredibly large; at 2.25″, they measure larger than actual DASL board hexes.  What this means in practice is that you will have a hard time fitting this product on your playing area, it will be a pain to set up all those map panels, and the hex sizes are ridiculously too large for the tiny scenarios included in the product. The hexes were blown up so large that many of the buildings, not created with vector graphics, are blurry.  There is no reason for this product–from the players’ perspective, at least.

The module never actually specifies if this is a product that simply has big-ass hexes or if its scenarios should now actually be played using DASL rules–an important distinction due to things like Hand-to-Hand Combat.

The product comes with half of the counters of the previous version–not that any of them are needed.

With a $49.95 price tag for this steroid-enlarged mutant version of what once was a tiny product, there is no reason to buy this version.  The second edition was overpriced for what it contained. 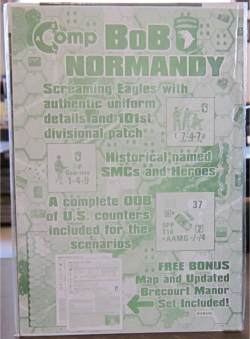