The contents will seem familiar to purchasers of previous Paks; there is little in look or feel to distinguish the scenarios in this pack from any of their predecessors.  Proof-reading and rules clarity are, as usual, indifferent (even to the point of misspelling “Leningrad”).  ESG101 (Bullseye!) has the Germans setting up first and the Americans moving first, but all the Germans enter from offboard, so there are no Germans to set up “first.”

One of the scenarios seems more generic than historical; ESG99 (An Even Match) does not bother to identify the American force at lower than the corps level and the German force at lower than the army level (!), while the aftermath is devoid of a single fact:  “With both sides almost equally matched the battle proved to be only carnage.  Heavy losses were the order of the day for both sides.  Only élan and single minded bravery would make the difference.  In this far flung corner of the western front, so far from the ‘real battles’ taking place far to the north, the infantry men on both sides wondered what really was gained from their loss.”  With all this, it is difficult not to be suspicious that the scenario was simply concocted out of thin air, rather than based on an actual historical event.  Even most of the scenarios that look as if they were based on actual actions have aftermaths that seem lazy and generic.

The varied actions represented include British vs. Japanese (Malaya 1942), Soviets vs. Germans (Soviet Union 1942), Americans [USMC] vs. Japanese (Eniwetok 1944), British vs. Germans (Italy 1944, France 1944), Soviets vs. Romanians (Romania 1941), Belgians vs. Germans (Belgium 1940), Americans vs. Germans (France 1944, Netherlands 1944), and Greeks vs. Italians (Greece 1940).  The scenarios are mostly divided between small or large actions, with little in-between.  One scenario uses OBA and Air Support; no scenarios use the Night rules.  ESG97 (Foot in the Door) is a DASL scenario.

The most playable/interesting scenario seems to be ESG100 (Hollis of the Howards), a tournament-sized British/German scenario. 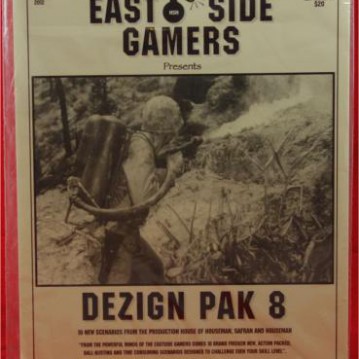