Contents:
Desperation Morale has not examined this product and cannot verify claims of its contents. Critical Hit often has made inaccurate claims about the contents of its products.  This product, according to Critical Hit, contains a historical map assembled from 12 12" x 18" glossy heavy paper/light cardstock map panels, 2 pages rules, 1 1/2" countersheet (280 counters), and 10 scenarios.

El Alamein: Deir Munassib 1942 is a historical module published by Critical Hit that features a minor action during the Second Battle of El Alamein in 1942, featuring a (failed) British attack against positions held by the Italian Folgore Division.  Critical Hit may have a list of flaws as long as the beards of ZZ Top, but one thing the company does do is support ASL DTO (desert) fans more than any other publisher, either official or third party.

Deir Munassib is mostly a modest affair, in terms of components, except for its large map, which must be assembled from a dozen 12″ x 18″ heavy paper/light cardstock map panels. It also comes with a few pages of rules, a single countersheet (with German and Italian infantry), and 10 scenarios, one of which, Deir 4 (Folgore Alamo), is a monster-sized scenario inserted in lieu of a campaign game. 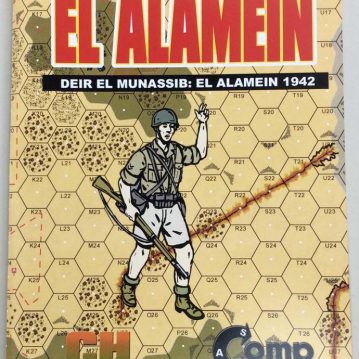