Home > Products > Euro-Pack IV: The War in North Africa / Euro 4: Out of the Sand

Euro-Pack IV is the fourth set of scenarios reprinted from ASL News, the European ASL magazine, this time with an all-desert theme. They have not been very popular and are rarely played, possibly because of the relative unpopularity of DTO in ASL generally, but desert lovers will probably want them.

The focus on Free French and Italians makes some of the scenarios seem a little fresher.

That last scenario, DYO-X9 (No Time For Love) is a DYO scenario in which each player is given points to spend, apparently from Chapter H.

2nd Edition (Euro 4: Out of the Sand) Comments:  Some 20 years after its first release, Critical Hit dusted off and re-released these scenarios with a new, renamed edition. Desperation Morale has not seen this product, but it is likely some of the scenarios have been tweaked. 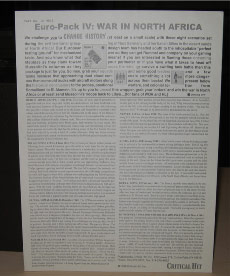