Like its predecessor, Friendly Fire Pack 2 consists of 8 unthemed scenariös printed on cardstock in black and white (although there is red numbering and colored nationality symbols). All scenarios were designed by either Martin Svärd or Mattias Rönnblum. The scenarios are mostly small to medium-sized, designed for tournament play, although FrF10 (Assault on Wielki Dział) is a massive 1941 East Front action. Other scenarios take place in France 1940, Russia 1942 (3 scenarios), Sicily 1943, and eastern Germany 1945 (2). In two scenario packs, the Swedes have yet to visit the PTO or the desert.

In its American debut at ASLOK 2006, the most popular scenarios seemed to be FrF14 (Patton Breaks Loose), although FrF11 (Rostov Redemption), FrF12 (The Fields of Black Gold), and FrF15 (Kampfgruppe 1001 Nacht) all saw a fair amount of play. The latter scenario, though seemingly balanced, offers a very gamey situation. It features a variety of late war Soviet AFVs with strong frontal armor trying to exit 4 AFVs down the long end of a mapboard. Because the defending Germans cannot easily penetrate the Soviets’ frontal armor, their setup will feature many units positioned unrealistically “backwards,” so that they can get rear shots at the Soviet vehicles.

Overall, however, it seems to be another quality effort by the Friendly Fire duo of Martin and Mattias. It is worth noting that the scenario cards feature better writing and proofreading than most third party ASL products published by people for whom English is their native language. It is well worth getting. 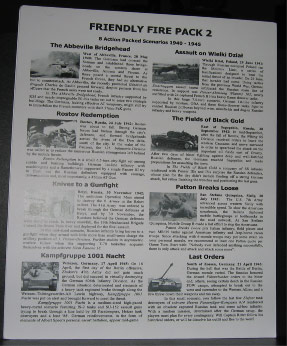