Contents:
8 scenarios, 2 "bonus" counters (only in a limited number of copies; see below)

The “action packed scenarios” of Friendly Fire Pack 3 follow the formula that the Friendly Firers established in 2005: 8 varied scenarios (no themes), well playtested and mostly of tournament-suitable size. The look and layout of the scenario cards is the same as in previous packs, as is the careful attention to proofreading (sadly lacking among far too many third party publishers).

The one innovation that Friendly Fire Pack 3 introduces is the inclusion of a new counter for a German anti-tank gun, the PaK 41, which appears in one of the scenarios. The creators made a limited number of hand-made mounted versions of these counters, which were given or sold to a small number of people, but most copies of the scenario pack will not have them. Players must rely on pictures of the counter for the counter details, or must create their own.

In this third scenario pack, the Friendly Firers finally reach out to include the Japanese, including a 1937 Sino-Japanese War scenario, FrF17 (The Marco Polo Bridge Incident), and a 1945 Russo-Japanese action in Korea in the last days of the war, FrF24 (Forging Spetznaz). The latter features the equivalent of Soviet commandos, and has a very interesting tactical situation with divided Soviet forces sandwiching a Japanese force, plus a Japanese counterattack.

FrF18 (Through Fire and Ice) pits Soviets against Finns near the end of the Winter War in 1940. The remaining 5 scenarios, however, are all East Front actions. FrF20 (Adolf’s Amateurs) features what may be the poorest quality SS troops in any ASL scenario. FrF22 (Wunderwaffe) is the scenario with the 2 PaK 41s, a rare German AT gun that had a tapered bore and has a TK# of 24. This scenario is also the largest scenario in the pack (14 Soviet squads and 7 tanks attacking 11 German squads, 2 AFVs, and 2 AT guns). All the scenarios in Friendly Fire Pack 3 are playable in a tournament environment.

Overall, Friendly Fire Pack 3 seems to be just as good a value as its predecessors and is well worth getting. 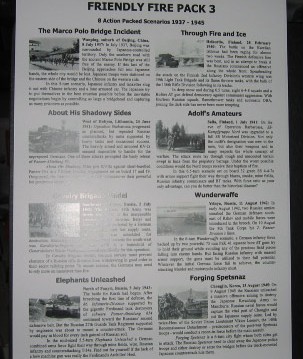