Contents:
10 scenarios, 1 counter (in only a few copies; see below)

Half a decade since their debut, the reputation of the Friendly Fire scenario packs is perhaps second to none.  Though Friendly Fire’s scope is limited–it doesn’t do maps or counters or HASLs, just geomorphic map scenarios–what it does choose to do, it does very well.  Each year, hardcore ASLers eagerly look forward to a new batch of scenarios by the Friendly Fire brain trust.  The two main Swedish noodles are, as they have been all along, Mattias Rönnblom and Martin Svärd, but in this edition there are also scenarios designed by Chris Mazzei and Peter Struijf.  The playtesting and proofreading has been done by an international cavalcade of characters.

The scenarios are printed on 5 glossy pieces of cardstock (European-sized), without counter artwork.  For attendees at the ASLOK ASL tournament (and presumably the Friendly Fire tournament in Sweden as well), the Friendly Fire producers created a “freebie” counter of a rare AFV that appears on one of the scenarios.  These homemade counters are attractive, but unavailable unless one obtains one by finding and purchasing a used copy originally purchased at one of those tournaments.  In other words, ordered copies of the pack do not come with the bonus counter (and no, they don’t have extra counters left over, so don’t bother to ask).

As before, the Friendly Fire scenarios feature a wide variety of actions (though, also as before, the PTO tends to get short shrift).  This time around, scenarios include Finns vs. Soviets (Finland 1940), Polish partisans vs. Soviets (Poland 1940), Indians vs. Japanese (Burma 1942), Germans vs. Soviets (Soviet Union 1943, Soviet Union 1944, Poland 1945, and Berlin, Germany, 1945), Americans vs. Germans (Sicily 1943), Soviets vs. Rumanians (Rumania 1944), and Bulgarians vs. Germans (Hungary 1945).  The emphasis in Friendly Fire Pack 5 is overwhelmingly on East Front action.

Most of the scenarios are medium-sized, with a few small and large ones thrown in to round them out.  There are no scenarios that use OBA, Air Support, or Night Rules.  Two scenarios, FrF40 (Sporck’s Eleven) and FrF43 (Forest Devil) use ASLSK board u.

One of the scenarios, FrF5 (Skiing in Laponia) features a truly unusual play situation.  The scenario has two separate boards, which represent separate playing areas.  In this Finnish-Soviet scenario, the goal of the Soviets is establish a link-up between a group of four squads and one of two separate forces (one on each of the two boards).  The Finns must divide their forces between the boards and an off-board reserve.  However, when the Soviet four-squad group enters the playing area (all on one board), play is discontinued on the other board.  Thus the Soviet player can attempt to judge which board he is more likely to experience success with, and “negate” the other board.

Some of the other scenarios are also interesting, for various reasons.  FrF37 (Crossing Swords at Kyaukse) is a fast playing, tournament sized PTO scenario.  FrF41 (Romania Mare) is a rare late-war Rumanian counter-attack against the Soviets (with armor support); early results seem to favor the Soviets.  FrF42 (Kiss of Fury) is as odd as its name, featuring what is essentially a German half-track attack against a small Soviet force.  It may have novelty value.  FrF44 (Anhalt Pandemonium), a late war tournament-sized combined arms city fight, is likely to prove quite popular, if balanced.

Friendly Fire Pack 5 is another quality product that ASLers will enjoy. 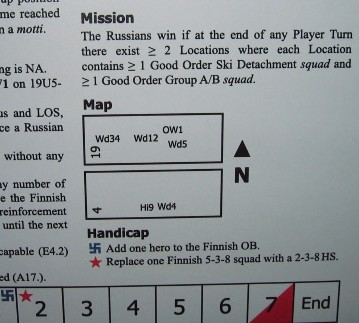