Apparently in anticipation of the re-printing of Code of Bushido and Gung Ho in the form of Rising Sun, in the summer of 2013, Battleschool began a new series of dice dubbed the “Pacific Series,” one of the first of which was a pair of Japanese-themed dice.

This set consists of two 5/8″ (16mm) custom precision dice.  One is white and where the 1-pip would normally be is instead a silhouette of a Japanese soldier and the kanji characters for “You striped me!”

The second die is red and where the 1-pip would be is instead a white rising sun emblem and more Japanese characters (“You are ambushed, mofo!”).   The dice are very attractive, some of the nicer dice that Battleschool has done.  Fans of the PTO could easily find some love for them. 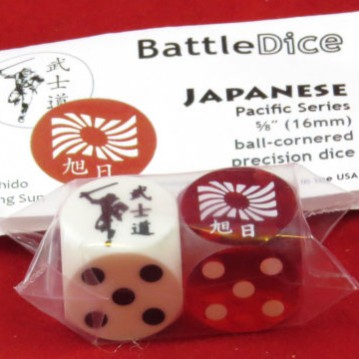