Contents:
Desperation Morale has not examined this product and cannot verify claims of its contents. However, it seems to contain a largish historical map formed from 9? glossy 12" x 18" heavy paper/light cardstock map panels, 2 1/2" countersheets (560 counters) and 1 5/8" countersheet (176 counters) for 736 counters, 4 pages rules, and 8 scenarios.

Kaunas Offensive: Operation Bagration 1944 is a historical module published by Critical Hit in 2018 that depicts the actions of the German 16th Fallschirmjäger Regiment and the Waffen SS’s SS-Fallschirmjägerbataillon 500 outside the Lithuanian city of Kaunus during the 1944 Soviet summer offensive (Operation Bagration) that demolished Army Group Center.

The module uses a large historical map half of which is dominated by low-lying terrain with woods and marsh and the other half of which is characterized by three hills orbiting a large pond/small lake.  The map itself is formed from what appears to be 9 glossy 12″ x 18″ heavy paper/light cardstock map panels that have to be assembled to compose the map. Assembling more than 4 such panels can be a pain, but not all of the scenarios in Kaunas Offensive use the whole map area.

Kaunas comes with three countersheets, none of which are really necessary to play the scenarios in the product.  One sheet is a German Infantry/SW sheet, another provides the same for the Soviets and a third has German and Soviet vehicles.

It also comes with eight scenarios, one of which, KO8 (Kaunas Offensive), is a monster-sized scenario using the whole map and intended to substitute for a campaign game.  The scenarios are mix of sizes but tending towards the large/very large.

At the same time the product was released, also released–for separate purchase–was a “Monster Map Set” that recreates the Kaunas map with larger hexes. 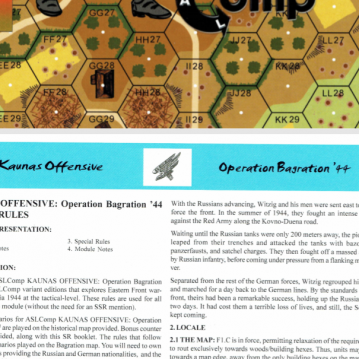