2017 "Feldgrau/Olive Drab Edition":  As above, but with alternative counter color schemes.

Krinkelt-Rocherath is not an unpleasant skin condition, it is rather a reference to two villages in Belgium that became the scene of some fierce fighting between American and German troops in the first days of the Battle of the Bulge in December 1944.  The German 277th Volksgrenadier Division tried to push Americans of the 99th Infantry Division out of the two adjoining villages, which contained an important road junction that could lead to the Elsenborn Ridge–which the Americans needed to hold the northern shoulder of the “bulge.”  American resistance was fierce and both sides threw more troops into the desperate fighting.  In the end, the Americans held the twin villages for three days before executing a withdrawal, stymieing the attempt of the 12th SS Panzer Division to break out and giving the Americans time to set up a defense along the Elsenborn Ridge that the Germans would never crack.  It was a prime example of the tough fighting by American infantry that won the Battle of the Bulge.

Krinkelt-Rocherath (hereinafter KR) is also the name of a Critical Hit historical module depicting tactical actions from the battles for the two villages.  The topic is a good topic for an ASL historical module, but Critical Hit is hardly the publisher likely to give it the tender, loving care that it deserves. No designers or playtesters are credited in the module.  Often when Critical Hit fails to mention a designer it means that Ray Tapio himself designed the scenarios, and this may be the case here.  When Critical Hit fails to mention playtesters, well, one should draw the obvious conclusions.

The module is easy to get into; there are in effect only about 2 1/2 pages of rules and much of that is simply minor terrain clarifications. The module does contain lengthy “bayonet charge” rules, which are gratuitous human wave rules originally drawn up by Kinetic Energy and later inexplicably adopted by Critical Hit. Critical Hit similarly “borrows” the “Marching Fire” rules from Kinetic Energy–again, an entirely gratuitous rule.  However, both of these can simply be ignored.  KR provides a few paragraphs of what it calls “light” slope rules, the light referring to the complexity of the rules rather than the slopes themselves.  They are certainly easier  than “official” slope rules.  As is typical for recent CH modules, it also provides a slimmed down version of the Night rules.

Krinkelt-Rocherath was a battle in which American artillery played a key role, so there are some rules to represent that here, including a “Two Four One Strike,” which creates a 19-hex blast area (essentially an FFE expanded by one hex all around).  KR also includes a new type of radio, the “handi talki,” which seems like needless chrome.  Also gratuitous are counters for U.S. Browning Automatic Rifles, which Critical Hit has attempted before, to essentially no acclaim.

KR comes with three countersheets, one with 5/8″ counters and two with 1/2″ counters.  The packaging says the product comes with 4 countersheets, but Critical Hit content information on packaging is very often incorrect.  The majority of the counters are simply duplicates of American and German counters already in the system and thus are gratuitous. There was some slight problem with the die used to die-cut the counters, with the result that many of the counters are not cut all the way to the edge, especially on the bottoms, so care must be used when removing counters from the counter trees. The “new” counters provided are ATMM’s in counter form (so that they can be provided individually in an OB), 5 prisoner counters in U.S. color, 4 BAR counters, 4 Gammon Bomb counters, and 3 “handi talki” counters.  The counter artwork is good; graphically, the counters are fine.

The map is typically the star of any historical module, and that is certainly the case here.  Critical Hit a while back stopped using standard historical maps and for some reason started printing its historical maps on large 12″ x 18″ glossy map panels (sheets of light paper/heavy cardstock) that have to be assembled to form the playing area. Typically, assembling over 4 such panels is a pain; KR comes with 9 of them (though most scenarios take place on only a tiny part of the playing area and thus do not require all map panels).  The panels are drawn in a “winterized” style, with open ground depicted as shades of white or gray (for other elevations). Brush becomes the color of vomit, while woods are essentially unchanged. Roads get a little scruffy as if they have snow bordering them.

The areas outside the villages are dominated by, on one side, open fields surrounded by hedges, and on the other side mostly woods. The villages are mostly one-hex wood buildings in Rocherath and one-hex stone buildings in more cosmopolitan Krinkelt.  The artwork is more utilitarian than stunning.

KR comes with 8 scenarios. KR1 (Parker’s Silver Star) seems to be cribbed from this webpage.  The second scenario seems to be cribbed from an Osprey book whose content is available on-line.  The third scenario was taken from this source.  The odds are good that the rest of the scenarios are also each based on (probably single) web-based sources. The scenario cards were sloppily proofread, with one of them, KR4 (Lausell Mad Minute) even misspelling the name of the location, which is actually Lausdell.

Half of the scenarios are small; half are large; there really aren’t any medium-sized scenarios.  Of the large scenarios, two are very large–those are the only two that use the entire map area.  Five out of the eight scenarios have OBA (often multiple modules), so if OBA is not your thing, this is not the module for you.  Three of the scenarios use Night rules (including the monster scenario, of which 14 turns take place at night).

There are no campaigns, as Critical Hit mostly abandoned those years ago.  The monster scenario, KR8 (Battle of the Twin Villages), which seems to represent about two days of fighting, uses the entire historical map to represent the initial attacks of the 12th SS Panzer Division.  It features 57 German squads, 5 guns, and 40 AFVs pitted against 107 U.S. squads, 6 guns, and 24 AFVs. Many of those American units come in as strings of reinforcements.  The U.S. also gets 3 150mm OBA modules and three company mortar OBA modules. The Germans get two OBA modules. To win, the Germans must control most of the American command post locations.  The other very large scenario, KR5 (Deathtrap for Panzers) is more or less KR8, but with the reinforcements lopped off.

It is hard to have any confidence in a CH module these days.   They often resemble module kits more than fully developed and playtested modules. Though the battle is interesting, one cannot help but feel that purchasers will actually end up being the playtesters.

Battle of the Twin Villages Feldgrau/Olive Drab Edition:  In 2017, Critical Hit quickly released a new version of this product, with the difference that the German counters were now rendered in a light gray color (mistakenly called “feldgrau” by Critical Hit. The Americans also have an alternative olive drab color scheme. The color choices were not great. There appear to be no other differences. 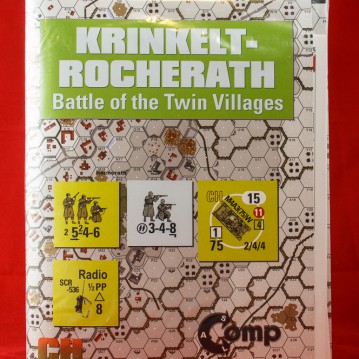