Contents:
92-page magazine, plus 11 color scenarios on cardstock inserts, sheet of 6 overlays (5 shellhole, 1 building cluster) and 6 unmounted counters (aerosleds in U.S. colors; some copies of the magazine came with another counter-strip featuring the aerosleds in Soviet colors)

Le Franc Tireur No. 7 (LFT7) was almost guaranteed to be popular because of this theme:  Barbarossa 1941.  Additionally, this issue was the first issue that many North American ASLers were able to get their hands on.  As a result, Le Franc Tireur scenarios (all in English) began to see more widespread play with this issue.

The issue features several articles (all articles in this issue are in French) related to the first year of the East Front, as well as the usual series of photographs of areas of action, including several in color.

Additionally, LFT7 contains the usual slew of reviews of recent ASL products, tournament reports, an article analyzing strength factors in ASL (continued from the previous issue), an article on winter weather, an overview (and English rules for) aerosleds, an AAR of an unusual game situation, an analysis of close combat in ASL (including Tom Repetti’s CC flowchart), an article on Cavalry in ASL, a detailed Series Replay of the Schwerpunkt scenario SP81 (Betje Wolf Plein) between Jean Devaux and Xavier Vitry (with commentary by Laurent Closier), and an overview of ASL resources on the Internet.

The scenario cards have an upgrade in their graphics, with the VASL counter artwork of the past several issues dropped in favor of better artwork.

The scenarios include a good mix of sizes.  Almost half are medium-sized, with the balance split equally between small and large (the latter including the massive FT29, The Porechye Bridgehead).  A number of the scenarios feature very interesting situations; among them are FT30 (Death is their Trade), an SS vs. partisan cavalry action; FT36 (The Mongol Ride), a cavalry action featuring Desert/Steppe terrain; FT37 (Siberians are Coming), a Deep Snow/Extreme Winter scenario with Soviets on skis; and the extremely imaginative FT38 (Aerosleds to the Rescue), which takes place entirely on frozen Lake Onega and features Soviet troops zipping around the ice on aerosleds against Germans on skis.  Several of the scenarios are linkable into a mini-campaign (the rules are in French, but were translated into English in Le Franc Tireur #8).

Two of the scenarios have important errata.  In FT32 (Lenin’s Sons), it is hexrows D-Z which are playable.  In the same scenario, the German OB needs to have an additional LMG and DC.  In later printings of this issue, these errors were supposedly corrected.  In FT34 (Borodino Train Station), North is actually towards the BOTTOM of the map, NOT the top (!).

Unfortunately, some of the scenarios seem somewhat unbalanced, notably FT33 (Flanking FTs), FT35 (Last Push to Mozhaisk) and FT32 (Lenin’s Sons).  One of the scenarios, FT29 (The Porecheye Bridgehead), was later reprinted as an official scenario in the ASL Journal (J93), where it has developed a distinct reputation as a dog.  More scenarios from the issue were reprinted in ASL Journal #7, including Borodino Train Station, The Yelnya Bridge, Flanking FTs (as Flanking Flamethrowers), and Lenin’s Sons.  Of these, the latter two underwent changes to try to address balance problems.  Flanking Flamethrowers still seems to be unbalanced, but the MMP version of Lenin’s Sons actually balances the scenario quite well and made it a quality scenario.  The Yelnya Bridge is good in both versions.  What these scenarios suggest is that LFT was coming out with solid scenario concepts during this time period, but that its playtesting and quality control was still somewhat shaky.  To their credit, MMP realized the value in these scenarios and reprinted them.

Like most issues of LFT around this time, LFT7 comes with an overlay sheet.  This sheet features 5 shellhole overlays (Sh1, Sh2, Sh3, Sh4, Sh5) and a cluster of 7 one-hex wooden buildings (FT3).  This sheet also contains unmounted counters for six aerosled counters, oddly in U.S. colors. This seems to have been an error, as some (presumably later) copies of LFT7 also came with a paper slip of Soviet-colored aerosled counters. 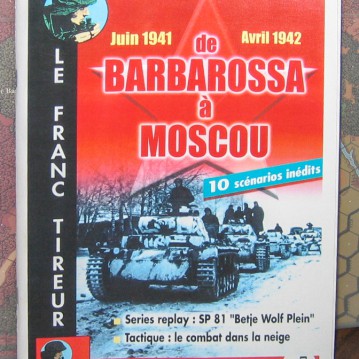