One of the pleasures of ASL is the opportunity to go to ASL tournaments around the United States–indeed, around the world–and to meet and socialize and play with/against a wide variety of other ASL enthusiasts.   Many ASLers are so dedicated that some of these ASL tournaments have been around for decades and have become hallowed traditions for ASL fans in their areas–and often beyond.

One such tournament is Nor’easter, a popular annual ASL gathering held in the Boston, Massachusetts area, hosted by the Yankee ASL group and the Dispatches from the Bunker/New England Volunteers folks, a couple of stalwart groups of ASL gamers.  In 2016, Nor’easter had its 20th anniversary and New England ASLers celebrated this fact by releasing a special anniversary scenario pack at the tournament, later making it more widely available for ASL fans everywhere (although via PDF rather than as a printed product).

The scenarios are an equal mix of small, medium, and large-scale actions.  One scenario uses Night rules, while one scenario uses OBA.  No scenarios require Air Support, but one scenario, YASL10 (Dropping Topside), is an Air Drop.  YASL8 (Ass Backwards) is essentially a new Operation Veritable scenario, set on that module’s Riley’s Road map.  YASL4 (The Twin Pimples) is that very rare bird, an Italian-British DTO night action.  For the very niche group of ASLers who might enjoy such an action, this will be welcome news.  YASL1 (Full Immersion Baptism) is a large Spanish Civil War scenario involving four colors of counters (one does not often see Allied Minor, German, and Soviet counters on the same side!).  Scenario YASL12 (Sorry Mac!) is not only a DASL scenario, but one that utilizes several boards from Le Franc Tireur’s Deluxe Pack #1, the first product to do so.  YASL9 (Rack ‘Em Up!) is an all-armored scenario, for those who like that sort of thing.

Two of the scenarios allow players to alter aspects of the scenario for greater user choose and replayability.  YASL11 (Ja, Bix) allows each player to choose one of three “OB Modifications,” although some options go further than simply modifying the OB and can allow things such as expanding a player setup area or allowing PF use.  YASL13 (Die to the Last Man), a very large British-Japanese PTO scenario, gives each player 12 Purchase Points with which to select up to 8 purchases.  Purchase options can range from adding forces of various types to increasing HIP or giving special abilities such as the ability to conduct “Bayonet Charges.”

NE20 comes with two overlays (YASL1 and YASL10), which are each intended for the scenario after which they are named.  The overlays both essentially combine several official overlays into one larger overlay, to make it less difficult to set up the scenario and to play it.  Players who want to dig out all of their official overlays and use them can do so.  The one negative aspect of the overlays is that their graphic quality is rather poor, seemingly intended for display on computer screens rather than as print-quality graphics, with the result that the overlays are rather pixelated.

The 13 scenarios are a somewhat schizophrenic mix of fairly rules-intensive, “advanced” scenarios and much simpler, easier to play scenarios.   Five of the scenarios are of the more advanced/complicated type.  In some cases, the rules really are very detailed. For example, in YASL1 (Full Immersion Baptism), one of the three Nationalist force types, the “Moorish” force (presumably troops from Spanish Morocco) get the benefit of a +1 LV Hindrance DRM that applies to all enemy attacks against them at ranges of 7 or more hexes, apparently because the Moors were rather ghostly.  That scenario has 34 lines of special rules.

The scenarios are printed (or come virtually, for those who have a PDF version) in color, with miniature map representations showing the area of play (something that MMP for some reason still doesn’t do).  The layout design does not use any counter artwork, but thankfully provides enough vehicular information to make the vehicles relatively easy to find.

Generally speaking, the layout is good, but two aspects of the design leave a bit to be desired.  The first is the decision to include drop shadows for almost everything from the scenario title to the turn numbers to the counter factors themselves.  Unfortunately, this adds nothing to the aesthetics of the scenario cards, while at the same time adding in some cases considerable blurriness or fuzziness–and one must consider that most players will probably have to print these out themselves, so if their own printer is not of the highest quality, they might be even more fuzzy.

This factor is made somewhat worse by the nationality color choices, several of which are a bit too dark. In particular, the Soviets and the French are problematic, as well as all brown informational counters.  Though the drop shadows for these counters are white rather than grey, this does not help the visibility of the printing on the counters.

In all likelihood, this problem probably emerged from the fact that many colors that look perfectly fine on computer screens often actually print in a darker hue, and designers need to compensate for this fact when making color choices.

Since these scenarios are primarily distributed through a PDF version, it ought to be possible for the publishers to lighten the tones of several colors and to eliminate some of the drop shadows without too much effort.  If this were done, then future purchasers of the product might have somewhat more easily readable scenario cards.

The scenarios feature a diverse group of designers, from veteran ASL scenario designers to much fresher faces.  An experienced crop of playtesters were involved with the project, so one hopes that the playtesting was solid and extensive. Several of the scenarios, such as the Bougainville scenario, seem as if they could just as easily have been scenarios from the Dispatches from the Bunker newsletter.

Several of the scenarios have interesting aspects (in addition to any that might have been mentioned above).  YASL8 (Ass Backwards), the OVHS scenario, is a big gun vs. big gun scenario, in that it pits Panthers against the backwards-firing Archers.  YASL6 (Hein Olshana), if balanced, is a perfect-sized East Front tournament action. YASL13 (Die to the Last Man) represents a British attempt to eliminate a Japanese pocket.  Both sides get CVP and the British win if they have more than the Japanese.  However, the Japanese can also get EVP for essentially breaking through the British lines and existing off the opposite side of the map during turns 2-5 (of a 6.5 turn scenario).  Thus the Japanese player must decide early on whether to turtle up or to go for a “fast” victory.  A quick analysis suggests that the “fast” victory might be difficult for the Japanese player to achieve, especially considering the substantial British reinforcements that come on board, although the Japanese can purchase an option that might make such a stratagem more attractive.

All in all, the pack looks interesting and it is certainly a fitting way to commemorate the long-lasting and much-appreciated ASL tradition of the Nor’easter tournament.  Northeastern U.S. ASLers can be proud of both the tournament and the scenario pack. 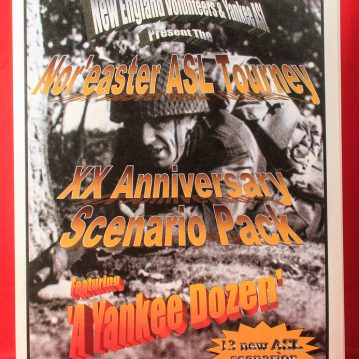