No scenarios use Night, Air Support or OBA rules.  Generally, the SSRs are short and sweet.  Every one of the scenarios does one odd SRR, though:  “Each side’s SAN may never be < 2; any action which would reduce a side’s SAN to <2 instead Pins that side’s sniper.”  It is not clear what purpose this rule serves, especially as the scenarios are small enough that sniper action alone could possibly determine who wins or loses. It may possibly be a “grudge” rule, though that’s not certain (“grudge” rules are SSRs that are put in scenarios not because they are needed to help simulate the specific historical action depicted in the scenario but rather because the designer has developed a dislike for an ASL rule, or lack thereof, and unilaterally decides to re-write the rulebook via the SSR method).

The scenarios are all 5.5 to 6 turns long, which is perhaps average for tournament-sized scenarios, though one often sees scenarios that are 4.5 or 5 turns long. However, the scenarios tends towards the below-average in size. All but one of the scenarios are small in size; the exception is (barely) medium-sized. A typical scenario might be Q11 (Demented with Grief), which pits 10 attacking British squads (with six SW) against 8 defending German squads (and 2 SW, plus fortifications). Often Lone Canuck products feature scenarios that are not merely small in size but are truly tiny in size (like 5 squads vs. 3 squads). Luckily, this product features no real “Antman” scenarios; most are small but at least have a certain modicum of forces. What they don’t have, oddly enough, are any vehicles–all of these scenarios are infantry vs. infantry scenarios.

Two of the scenarios feature or are intended to feature, for one side, machine-guns in pillboxes fortified with Wire and Mines.  Such “machine gun nests” are increasingly showing up in recent Lone Canuck products.

The scenarios here are basically for people who want fast-playing, meat and potato actions.  Or, given the absence of vehicles, perhaps just meat actions. 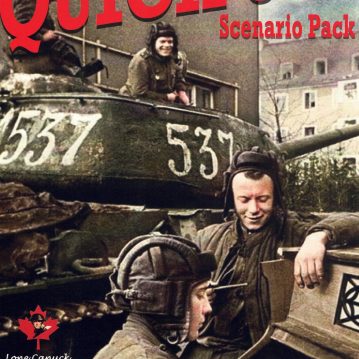