The genesis of the first issue of Rally Point can be traced back to the scenarios in Armies of Oblivion.  That module, which finally provided vehicles for the Axis Minors, was quite well done, but almost all of the scenarios included in it were very large–too large for tournament play.  Ironically, at the same time it was finally possible to play Axis Minor scenarios, most of the available scenarios were too large to conveniently play in most ASL playing situations.  Several third party publishers released Axis Minor scenario packs, but many of those scenarios, too, were very large.  Brian Williams and Evan Sherry realized that there was a real need for playable tournament-sized actions featuring Axis Minor forces, and this was the impetus for Rally Point.  That there really had been such a need became clear at ASLOK 2006, when Rally Point scenarios were probably more played than any other new release appearing at ASLOK that year.  As of 2014, RP1 scenarios have clearly been collectively played more than the scenarios of any other Rally Point.

Of the 10 scenarios, most are small or medium-sized; a couple are large, but none are very large.  Most are easily playable in a tournament setting.  Many of the scenarios take place in Budapest 1945 (Sherry relied heavily on Krisztián Ungváry’s book on the siege of Budapest).  The scenarios include 2 Hungarian vs. Romanian actions, 3 Soviet vs. Hungarian actions (one of them featuring the “Europa Flying Squad Battalion”), one Soviet vs. Romanian action, one Soviet/Romanian vs. German action, one German/Romanian vs. Soviet action, and one German/Slovak vs. Soviet partisan action.   One of the scenarios, RPT8 (Well Taught), uses Map w from ASL Starter Kit 1.

Most of the scenarios look promising; if there is a weakness, it is the same one that afflicts most ASLers wishing to design scenarios using the Axis Minors, and that is the lack of readily accessible English-language source materials.  Schwerpunkt handily includes at least one scenario design source on each of its scenario cards, and every one of the sources in Rally Point 1 are among the well-known handful of such sources.  This lack of sources has several detrimental effects, one of which is a greater likelihood of scenario duplication.  Thus one of the scenarios in Rally Point, RPT10 (Slovak Salvation), designed by Pete Shelling, is the exact same scenario situation as RBF33 (Brought Low in Lojev), from Heat of Battle’s Recon by Fire #3, designed by Steve Swann.  The scenarios themselves are quite different in conception (the Rally Point version looks much better), but the duplication occurred because there are only two books currently in print on the Slovak armed forces in World War II and one can only derive a limited number of scenario situations from them.  There is no easy solution to this problem, so one cannot place blame here.

In any case, the first Rally Point seems to be a success in terms of quality, and if more Rally Points appear as promised, ASLers will no doubt be pleased.

2009 Update:  Two and a half years after its release, the following scenarios appear to be among the most popular and balanced:  RPT3 (Városmajor Grange), RPT4 (Transylvania 6-5000), and RPT9 (Shelling the Sivash). 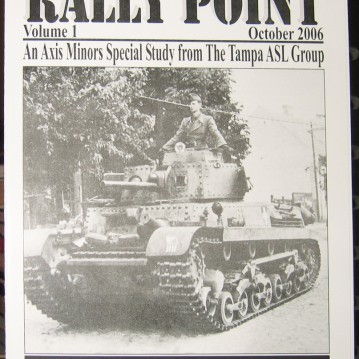