The second iteration of Rally Point, Schwerpunkt’s collection of themed scenario packs, has a rather unusual theme.  Rather than depicting scenarios related to a particular unit or conflict, the unifying “theme” in Rally Point Volume 2 (RP2) is the Advanced Squad Leader Starter Kit.  The 10 included scenarios are designed to be played using either the ASLSK rules or the full ASL rules; the pack claims that the scenarios have been “fully playtested with consideration for both rules systems.”  Moreover, all of the scenarios in the pack can be played using maps and unit counters found within the three ASL Starter Kits.  A player who has all three Starter Kits can purchase this product and immediately have 10 scenarios they can play without needing any other components.  SSRs in italics apply only when the full ASL rules are used; other SSRs apply to both rules systems.

Given that some ASL players are hostile to the ASL Starter Kits, which they tend to view as “not real ASL” or as competition to ASL that distracts MMP from the production of ASL products, and given that newbie ASLSK players are not likely to be familiar with third party publishers such as Schwerpunkt, it will be interesting to see how successful Rally Point #2 is in “fusing” the ASLSK and ASL audiences.  It certainly is a worthwhile effort, though, particularly if it will help lure ASLSK players into trying full ASL.

Because only a few nationalities are represented in the ASL Starter Kits, and even then only with a partial counter mix, and because all the scenarios must draw from a pool of only seven maps, there is a built-in limit in terms of the variety able to be offered.  One of the scenarios is playable only with the rules (but not necessarily only the components) of ASLSK1, while two more can be played with the rules of ASLSK2.  All other scenarios have vehicles and so require knowledge of the full ASLSK3 rules.

The scenario actions include U.S. vs. German (3 scenarios), Soviet vs. German (4 scenarios), and British vs. Germans (3 scenarios).  Half are small or medium-sized (mostly small), while the other half are large.  One scenario, RPT11 (Butchers and Bakers) introduces AP Mines.  One particularly large scenario, RPT16 (Miracle at Sinagoga), strains the limits of the countermix, forcing Starter Kit player to use an American FT and some Soviet tanks to help complete the British OB.

RP2 was the second successful Rally Point, garnering a fair amount of play.  Among the more popular scenarios from the pack are RPT11 (Butchers and Bakers), RPT13 (A Handful of Howdy), RPT15 (Comrade Klimenkov), RPT17 (Hetzer Hunters) and RPT18 (Worker’s Settlement No. 8).  The latter is the most played scenario of the pack. 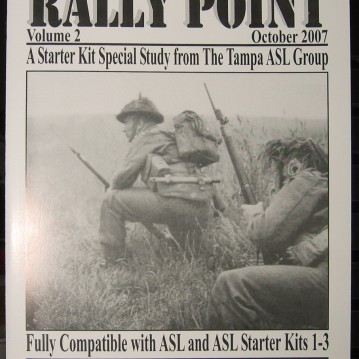