Unlike its predecessors, Rout Pak III contains no scenarios originally published in The Rout Report newsletter; rather, its scenarios are ostensibly “special event and tournament scenarios” not previously printed.

They are not popular scenarios and at least one of them, RPIII-1 (The Dragons’ Claws), does not even seem as if it had been playtested.

This scenario pack should not be a priority. 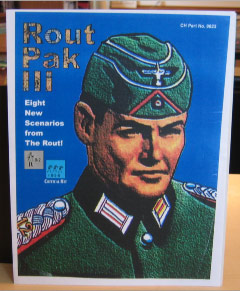