One of the warning signs that a Critical Hit product may have rules problems is when CH founder Ray Tapio pre-emptively warns people about the possibility in the product’s rules itself.  For example, in Russian Rarities 2, Tapio explains that this product requires players to have a “sense of expansive imagination” and that the counters simply provide a “framework for delving into subjects heretofore untouched.”  Ray expresses concern that the player might choose to “play ‘rules lawyer,'” i.e., actually expect the rules to be rigorous, and instead encourages players to engage in “‘co-participant’ mode,” i.e., deal with any rules ambiguities on their own.

Well, you can’t say you haven’t been warned.

Russian Rarities 2 (hereinafter RR2) is ostensibly the second in a series of scenario/map packs by Critical Hit that add rare Soviet vehicles to the ASL system.  Apparently, however, such vehicles got rather thin on the ground after the first iteration in the series, because the focus of RR2 is not on Soviet vehicles at all.  Rather, instead it introduces both German and Soviet rocket artillery pieces and vehicles, concentrating more on German weapons than Soviet ones.  Rockets–katyushas, nebelwerfers, and the like (hardly “rare,” by the way)–had actually appeared in the original Squad Leader series of gamettes, but were removed from consideration when it came to Advanced Squad Leader, which reserved rockets for OBA.  There were two main reasons for this–first, the rules needed for on-board rockets would be very complex and, second, rockets were very rarely ever used in a direct fire capacity.  By their very nature, they were not well-suited for this.

Given this, why would anyone actually want to add rockets back into the ASL mix?  No reason other than because they were there, apparently.  The rules provided here–even in “co-participant mode”–are complex, taking up 6 of the product’s 8 rules pages.  Given that some of these rockets have a minimum range of 40–or even 70!–hexes, one can see how these are weapons not really suited as on-map ASL units.

The other rules include a lengthy section on a type of remote-controlled German explosive vehicle (which, cribbed from Kinetic Energy, has appeared in several previous Critical Hit products), a few rules on “steel truss bridges,” and an odd rule that basically allows a sort of super crest status for virtually any unit or weapon in ASL.

RR2 comes with 8 scenarios.  CH assures the purchaser that “game-play and development” is the work of “CH staff,” which is a bit demoralizing, considering that said staff currently seems to consist only of Mr. and Mrs. Tapio.  One scenario features Soviet rockets (apparently “Russian Rarities” referred to the number of scenarios with Soviet rockets), six scenarios have German rockets, and one scenario seems to have none.  All of the scenarios are East Front scenarios except for RR15 (Koch’s Rockets), which is a Crete scenario featuring Germans and New Zealanders–Russians must be very rare indeed in that scenario.

Almost all of the scenarios (6 of 8) are large in size; the remaining 2 are medium-sized.  There are no small scenarios. One scenario uses Night rules, one scenario has OBA and two scenarios utilize Air Support. At least one of the scenarios is not original; RR9 (Hold Until Relieved) is a re-worked version of TEF1-5 (Panzer Pioneers) from Total East Front Pak I.  The Rocket OBA was replaced with on-board rocket counters.

Ostensibly, RR2 comes with 6 11″ x 16″ unmounted (heavy paper thinner than official geoboards) geoboards.  Actually, the boards are more like map kits, because each of them has to be trimmed on every side (that’s 24 sides in all, in case you weren’t counting) using scissors, a razor blade, a rotary cutter, a box cutter, or some other implement before they can actually be used.  Essentially, players have to finish creating the maps, because Critical Hit was too cheap to do it for them.

The geoboards were also hastily created with little in the way of tender loving care.  All the maps suffer from the Critical Hit Building Screw Up, in which any building that is not oriented perfectly horizontally or vertically ends up with jagged, pixelated graphics.  This makes some of the buildings look like graphics in an outdated video game, while other buildings look fuzzy or furry.

If that weren’t enough, the building graphics are for the most part not original but recycled.  Most of the buildings appeared in the Sweet 16 Geo Board & Scenario Collection published in 2013 or the Sweet 16 Geo Board Collection 2, published in 2014.  Indeed, one can take board Q of this product and compare it to board x20 from the Sweet 16 Geo Board Collection 2 and find on X20 almost every building that appears on board Q.  But if this weren’t brazen enough, Critical Hit uses the same buildings over and over again ON THE SAME BOARDS.  So take board Q again.  The two-hex building that appears on hexes E3-F3 shows up also in hexes E8-F8, D12-D13, and M2-N2.  The 4-hex rowhouse buildings that starts on H2 has clones that start on H6, M6, and M10.  Building B16 is cloned in C18.  Building H10 is duplicated in H12, E17, and I15.  Naturally, buildings that appear on board Q also appear repeatedly on board R, including 6 more copies of board Q’s E3-F3 building.

So, to sum up, RR2 comes with a paltry 8 scenarios, a single countersheet (with many rockets that will never see play because of their minimum range), and 6 messed-up boards.  What is one expected to pay for this?  A whopping $99.95.  Note that for this price one could purchase THREE copies of, say, Action Pack 9 (3 double-sided boards and 10 scenarios, all well-researched and playtested).

Don’t spend your money on this.

2nd Edition (Red Rarities II) comments:  In 2018, Critical Hit released Russian Rarities II as Red Rarities II. This version contains the same contents as the 1st Edition, except that the 11″ x 16″ geoboards now seem to be trimmed, and the Soviet counters (which are few in this module) are in Critical Hit’s red color variant.

Critical Hit did offer a “RED Russian Rarities II Upgrade Set” for $16.95, which consists only of a 5/8″ countersheet. 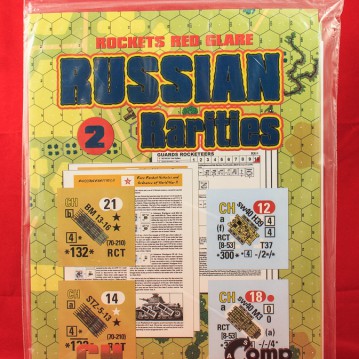