Son of Oblivion Pack (SoO) comes a year after Fanatic Enterprises’ previous release, which is a considerable period of time for the normally prolific Paul Kenny.  This pack includes a dozen scenarios, all of which feature Axis Minor countries of one sort or another:  Iraqis, Hungarians [3], Romanians [3], Slovaks [3], Croatians, and Bulgarians.

The scenario sheets are printed in color, apparently on an ink-jet printer, and have original counter artwork on them.  Of the scenarios, there is a reasonable mix of sizes.  About half of the scenarios are large, with the remaining scenarios small or medium in size.  Several are quite suitable for tournament play (including FE167 [Operation Noel], FE165 [Hill 91], and FE173 [Romanian Ritterkreuz]), assuming they are balanced.  One scenario, FE169 (Helping Hand), is very small, only 3 1/2 turns long, featuring 6 German and Slovak squads and 2 AFVs attacking 5 Soviet partisan squads.

Overall, SSRs are straightforward and there are few “advanced” rules used:  two scenarios have OBA, one scenario uses night rules, and one scenario employs air support.  One scenario, FE172 (Lousy at Ludberg) uses an ASLSK map (u); the remaining scenarios use geomorphic maps from the 1-52 mix.

That same scenario also features a pet peeve of the World of ASL compendium:  the use of Soviet support weapons and ordnance by Yugoslav partisans before September 1944.  The Soviets supplied no weapons to Tito’s partisans until after they linked up in the fall of 1944, yet FE172 features Yugoslav partisans with Soviet machine guns and even mortars and artillery pieces.

Perhaps more importantly, the historical text on the scenario card appears to be plagiarized directly from a page on the Axis History Web site.  That is inexcusable.

FE166 (Classic Meeting Engagement) is, indeed, a meeting engagement lengthwise across board 48 (with a few hexrows from 2 other boards thrown in for good measure) between Soviets and Romanians.  It looks like it could be a wild and wooly scenario featuring light armor, cavalry, and more.  FE175 (The Hohenruppersdorf Hop) is a meaty late war heavy armor city-fighting scenario with Romanians and Germans.

Shortly after release of this pack, it was discovered that serious errata had appeared in at least 2 scenarios (FE170 and FE175), which required Paul Kenny to release fixed versions of these scenarios.  While players who purchase the pack directly from Fanatic Enterprises would naturally receive the fixed cards, players thinking about purchasing on the secondary market, such as E-Bay, should make sure that the pack contains the updated scenarios.

Since its release, Son of Oblivion has gotten virtually no play on ROAR. 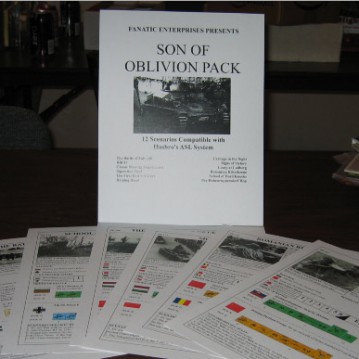