The fifth issue of Tactiques provides a focus on Kursk and the Red Army, with several articles on these subjects.  It even includes an impressive campaign game, Stalnié Prostori, using geomorphic maps (essentially three sets of 6 maps, which overlap, representing the continuing campaign).   In addition, there is a lengthy article on assaulting fixed defenses.

In many respects, it is the polar opposite of Red Barricades, in that it is heavily AFV-oriented, as opposed to the infantry-oriented Red Barricades.  Moreover, the playing area consists largely of wide-open terrain.  This is a campaign game for tank commanders if there ever was one.

It is sort of a forgotten campaign game, but because of its heavy vehicular emphasis it may well be of interest to ASLers.

In addition to the campaign game, there are four scenarios, including the good TAC40 (Cauchemar Écossais/Scottish Nightmare) and TAC42 (Une Guerre de Caporaux/A War of Corporals).

English translations of the scenarios and campaign game can be downloaded here. 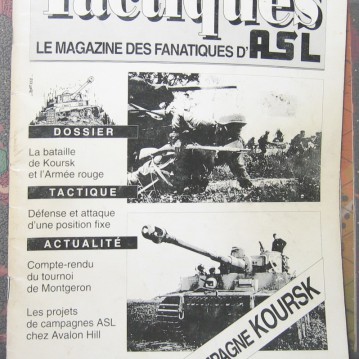