Ever since Advanced Squad Leader debuted in the mid-1980s, there have been those who have clamored for the conversion of all the original Squad Leader/Cross of Iron/Crescendo of Doom/GI: Anvil of Victory scenarios to the ASL system.  Over the years, Avalon Hill did this with some scenarios (they appeared in its periodicals), but not all.  MMP converted 13 more and released them as a scenario pack in 2000 (A G.I.’s Dozen), and various others in the ASL Journal and elsewhere.  But there were still several dozen unconverted old scenarios and some nostalgia-minded ASLers wailed for them–even though some of the scenarios were not even necessarily good scenarios.  Somehow, the passage of time made them more attractive (the gaming equivalent of smearing vaseline on the lens of an original Star Trek series television camera to film a close up of a female guest star).

2013 Update:  In 2013, MMP released a final such set, Rivers to the Reich (see that write-up for a list of all the ASL products with converted SL scenarios in them).

Veteran ASLer Jim Stahler, with lots of time on his hands, apparently, decided to finish the conversion process in a series of two scenario packs, the first of which is Turning the Tide.  Turning the Tide features 20 scenarios, all set in the period 1939-1943 (its sequel will contain the remaining unconverted scenarios, all set from late 1943 to 1945).  Two of the smaller scenarios were released earlier by MMP as freely downloadable scenarios; they appear here again.

Because these are all conversions of old SL-series scenarios, they typically use early mapboards.  For a couple of scenarios, Stahler swapped out one or more original boards for newer ones.  The ancient origin of these scenarios is noticeable in other ways, as well.  Almost 3/4 of the scenarios, for example, are 9 turns long or more, which makes them dinosaurs in modern ASL terms.

Many of the scenarios involve some of the more complex ASL rules.  OBA is present in 5 scenarios, Night Rules are in effect in 3 scenarios, 3 scenarios use Air Drops, and Air Support makes an appearance in 3 scenarios as well.  One scenario, U18 (Assault on a Queen), has an entire page of SSRs for the Dutch Royal Family.

As is sometimes the case with the older SL and ASL scenarios, the historical accuracy of a few of the scenarios may leave something to be desired.  In Assault on a Queen, the entire scenario is counterfactual.  Among the other scenarios, it is often the East Front scenarios that may be the most suspect.  U27 (A Winter Melee) takes place near Okorovovo, a town that seems to exist only in wargaming, not in the real world.  U28 (Sowchos 79) features generic Soviet units, while U31 (The Front in Flames) features men from the “57th Army” squaring off against the “XI Corps.”

What some of the scenarios do offer are interesting (and sometimes meaty) tactical situations that players can sink their teeth into over the course of a long day.  U14 (Sacrifice of Polish Armor) features some very early war tin cans firing at each other; U19 (Hasty Pudding) is an even bigger early war armor action (featuring British and German tanks).  U23 (Rehearsal for Crete) is a 5-board (!) monster featuring 32 Allied squads and a few guns and AFVs defending against a German air/glider landing with 35 squads.  U25 (Breakout from Borisov) is an equally large 1941 East Front action featuring 24 German squads and 13 AFVs squaring off against 54 Soviet squads and 12 AFVs.  U27 (A Winter Melee) is a wild and wooly scenario featuring groups of Soviet partisans, cavalry and paratroopers surrounding a group of 12 German squads and 3 halftracks.

Although one might wish that the energy spent converting these old SL scenarios was instead expended creating brand-new scenarios designed for ASL from the ground up, this is an inexpensive pack that offers a wealth of scenarios and situations.  Older ASLers may like the nostalgia aspect, while newer ASLers will just be glad to see some inexpensive official ASL scenarios made available to them.  With that, it’s hard to complain. 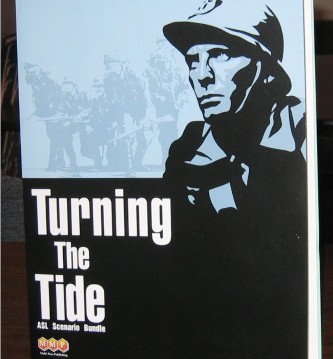