The genesis of the WCW Color Scenario Pack was a desire to create some original scenarios for the 1995 ASL Open tournament–and, for novelty sake, to do them in color.  At the time, there had never been any ASL scenarios printed in color.

They decided to use two scenarios (which appear in their ASL Stuff compilation).  However, major technical difficulties (of a kind, considering how much easier and more sophisticated desk-top publishing is a decade later, that seem almost incomprehensible today–such as a computer not having enough memory to print out a single scenario card in one go) caused them to fail to make their deadlines, so they postponed the project until the next year’s open.  In the meantime, they would develop even more scenarios.  It appears that Louis Tokarz himself did the artwork (drawings rather than photographs appear on each scenario card).  After a huge number of additional computer problems, they actually managed to create the set.   It was available to people at the Open and could be ordered for some time after that.

The scenarios represent a wide range of actions, from Spain to China to North Africa to the Soviet Union to Belgium.  All are small or medium-sized and are easily playable at tournaments.  One scenario, WCW4 (Cat Becomes the Mouse), is all armor (plus one AT gun).  One scenario has OBA, one is a Night scenario, and one uses (dry) rice paddies.

In 1997, Louis Tokarz stated that Avalon Hill proved uninterested in giving further permission to the Windy City Wargamers to use “official” ASL artwork.  Tokarz said that he was not interested in publishing more scenarios unless they were at that same level of physical quality.  Unfortunately, it also meant that WCW would not reprint the WCW pack, either, which quickly sold out and became a hard to find collectors items (most of the copies that most ASLers have are just that–photocopies).  It is a frustrating turn of affairs when one of the best ASL products of all time is consigned to a forced oblivion.

NEW:  In 2008, Louie Tokarz generously decided to allow the WCW pack scenarios be available for FREE DOWNLOAD from the Desperation Morale site.  Now you too can finally get these classic scenarios! 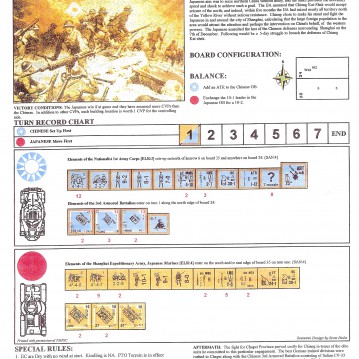