In what has now become something of a tradition, MMP releases a “bonus pack” each year at its annual January “Winter Offensive” ASL tournament.  These bonus packs typically consist of 1-2 geoboards and 2-3 scenarios, sometimes with an overlay thrown in.  Essentially, they are 1/3 to 1/4 of an Action Pack.  In 2014, MMP released the 5th iteration of its bonus pack (6th overall, because year one had a Starter Kit bonus pack instead of an ASL bonus pack).

Bonus Pack #5 (BP5) contains one unmounted geoboard, board 67.  Board 67 doesn’t add a lot to the system in terms of breaking ground on new board terrain.  The A-P half of the board contains a tiny crossroads hamlet, with some narrow streets, and is otherwise rather busy with brush, orchards, grain and woods, all randomly strewn about.  The R-GG half is much the same, sans hamlet but with a couple of gullies thrown in.  In a pinch, the board could be used as a PTO board for some place like the Philippines or Burma, especially insofar as the hamlet would be rendered mostly huts.  The R-GG half is entirely wilderness and could easily be used as a light terrain PTO half-board.

BP5 comes with three scenarios, all designed by prolific scenario designer Pete Shelling.  One of them, perhaps not surprisingly, is set in the Philippines, on the main island of Luzon; this is WO14 (For Pride’s Sake), a medium-sized scenario pitting a fairly substantial Japanese combined arms force against a much smaller U.S. infantry force accompanied by some vehicles and guns that can shred the Japanese AFVs.  Alas, it is a Night scenario, so it will rarely get play.

WO13 (All the Stops) is a 1944 East Front scenario of classic tournament size, pitting 14 Soviet squads and 3 Shermans against 7.5 German squads, 3 AFVs, and an 81mm MTR.  The Germans seem to have a pretty fair advantage in the scenario, though.

WO12 (Heart of Wilderness) is a 1942 East Front scenario that is quite a bit meatier.  Once more the Soviets are on the attack, from a variety of directions, with a total of 30 squads of various types, as well as 4 light tanks.  The defending Germans get substantial fortifications and 2 guns to add to their 16 squads (and excellent leadership).

All in all, BP5 is an unremarkable offering, but it is cheap and it adds a board to the system, so it is a pretty easy decision to make to get it. 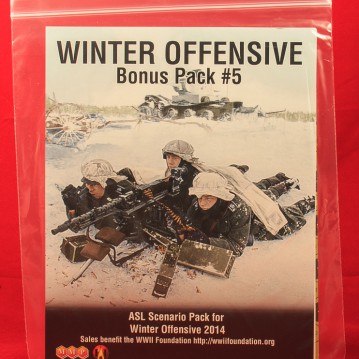