The Yankee ASL Nor’easter Pack II is a scenario/map pack designed and playtested by members of the Yankee ASL Club, and released in conjunction with their Nor’easter Tournament (run virtually in 2021 because coronavirus).  In 2016, many of the same people released a “20th anniversary pack” for Nor’easter, publishing it themselves, but for this second endeavor they partnered with Le Franc Tireur, a French third party publisher that has published a number of American designs.  This partnership allowed higher production values–including the printing of three new geoboards.

It is the geoboards that will probably first draw the eyes of most people who purchase YPII.  These geoboards are the first 8″ x 22″ geoboards printed by Le Franc Tireur in over 10 years (there was one in 2010s From the Cellar Pack 5; there were also DASL-sized geoboards in Deluxe Pack #1, released in 2014). However, the physical quality seems to be high.  The cardstock is the same thickness as MMP geoboard cardstock.  The board cuts are not 100% accurate, but nearly so, so there are unlikely to be any board alignment or matchup problems.  The boards do have a real tendency to curl, so they should not be kept in a humid place (and maybe something heavy should be placed on them). The artwork is in general high quality.  The boards were designed by Tom Repetti, a veteran ASL board designer.

Board NP1 is a wilderness board specifically designed for the PTO (it even uses palm tree symbols rather than orchard symbols). I t is a busy and difficult board, with plenty of jungle and bamboo, a stream that cuts across the narrow length of the board, a large patch of kunai containing a stream and a gully, and a nasty medium-sized, jungle-covered hill with double crestlines for its lower two levels. It does, at least, have a lot of paths.  It looks like a very interesting board to play on.

Board NP2 is much blander; it’s a crossroads village board, with all the buildings being one-hex stone buildings (or groups of 2-3 smaller stone buildings in a hex). A few fields and orchards round out the mix. It does feature a new terrain type, wooden fences, which are similar to hedges.

Board NP3 is very unusual. First, the textured yellow terrain makes it look starkly different from most ASL geoboards. It is basically intended as a desert board, with hillocks printed directly on the board. It’s an extremely busy board, with most hexes covered by crags, shellholes, brush, or some other terrain feature.  Oh, there are also tons of slopes.  It’s not to Desperation Morale’s taste, but it may be to yours.

The scenarios are printed in color on glossy European-sized paper. They represent a fairly diverse set of actions:

PTO fans will appreciate the numerous scenarios featuring the Japanese, while those interested in the exotic may lean towards the French in Indochina scenario. In any case, there are actions here for a number of different types of ASL fun. 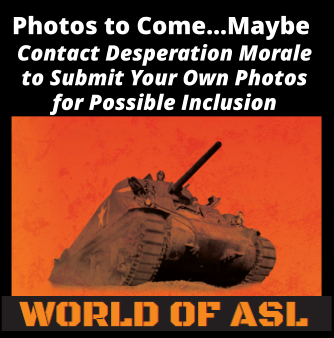