The awkwardly named AP Style AP 1 Collection (hereinafter AP1) appears to be nothing more than a cynical attempt to make a fast buck by throwing together a bunch of already-published geoboards and offering them as a collection.

There are no scenarios here, just boards; Critical Hit suggests that players design their own scenarios for them or use ASL’s DYO rules.

Any ASLer who is a crazy enough Critical Hit fan to be considering purchasing this product probably already has most or all of these geoboards.

Boards A, B, H, I:  Appeared in Across the Aller II. A modified form of I also appeared in AP Style Geo PTO 1.

Board J:  Appeared in Sealed Fate. 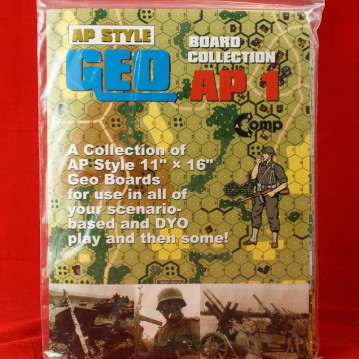