PTO 1 includes 2 pages of rules, most of which are “optional” rules intended to dumb down PTO terrain (most of which is not complicated to begin with).  There are also simplified Night rules as well as several rules designed to make USMC forces even more powerful than they already are in the official ASL rules.

The core of the product are the four included geoboards.  These are unmounted boards (but on a stock that is considerably thinner than “official” unmounted boards).  Not only they ostensibly designed to depict PTO terrain, but they are also rendered as PTO terrain in several ways–for example, palm tree hexes have artwork that looks like palm trees rather than orchards, and the boards only have paths, not roads.

Critical Hit has a habit of “re-using” its own boards in other products, so it is not clear if all the boards here are original or if they previously appeared in some other product and are re-treads (we did not feel like going back through all the relevant older CH products to check).  They may be original or modified from other versions.  All of the boards, for example, are true wilderness boards, without a single building.  However, they may also be derivative of official geoboards, considering all of the scenarios in this pack were designed for official geoboards originally (see below). For example, board CC, a large hill board, also appeared in Across the Aller II as well as (in modified form) in the AP Style Geo AP 1 Collection. Critical Hit simply likes to cut corners.

The product also comes with two overlays, one an airstrip that looks like the board 38 airstrip and the other a little collection of huts surrounded by palm trees.  The small countersheet consists of duplicate USMC counters that are already in the system.

As veteran ASLers and Critical Hit watchers probably already suspected, the scenarios included here are not original, but are cribbed from previously-published scenarios.  Critical Hit recycles so much you’d think it would stop global warming all by itself.

For example, PTO1 (Ichiki’s End) is a modified version of OAF6 (Colonel Ichiki’s Folly) from the OAF Pack.  PTO2 (Nakagawa’s Best) is just Leatherneck 2‘s LN2-1 (Airfield Fracas) plopped down on a new map–it uses the airstrip overlay that so resembles the airstrip of Board 38 because the scenario was originally designed on Board 38.  PTO3 (Shoemaker’s Stand) is simply a smaller and stripped down version of LN2-3 (“We Hold Here!”). PTO4 (No Cakewalk) is simply LN2-6 (Second Day in Hell) with a couple of tanks added.

Since there is no indication that any of the new versions of these scenarios were re-playtested, the original scenarios probably have a better chance of being balanced and playable.  Because of that, there seems to be little reason to purchase this pack, especially as it is priced at an outrageous $59.95. 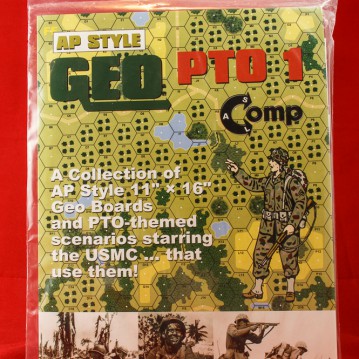