AP Style Geo PTO 2 (hereinafter PTO2) is the awkward name for the second in a series of scenario/map packs by Critical Hit featuring 11″ x 16″ Gary Fortenberry-style geoboards with a PTO theme.  Ownership of the previous module, AP Style Geo PTO 1, is required to play the scenarios here.

The scenarios of PTO1 were not original scenarios.  Rather, they are previously published scenarios that Critical Hit has modified, to varying degrees, to fit on the new geoboards.  It seems that PTO2 is similar.  So, scenario PTO9 (End of the First Element) is a re-jiggering of LN1 (Ichiki’s Mistake) from the old Leatherneck pack.  PTO113 (Ambush at Suicide Creek) seems to be based on Suicide Creek from the Leatherneck II pack.  PTO15 (A Ghoulish Task) seems to be a new version of X12 (Nowhere to Hide) from the Rout Report.  Presumably the other scenarios in the pack are similarly derivative.

Because there is no indication that the scenarios here were re-playtested, the odds are decent that the original scenarios are more balanced and playable than these odd variant versions.

PTO2 comes with 4 11″ x 16″ unmounted geoboards, using a paper stock noticeably thinner than that of MMP’s official geoboards.  The boards included are AA, BB, DD and KK.  If you think you remember another 11″ x 16″ Critical Hit board also with the designation AA or BB, you are correct.  Critical Hit has no consistent board numbering system.  The boards are depicted with “PTO terrain” in the sense that orchard hexes are graphically depicted as palm trees, there are no roads, and there are no buildings.

Some of the boards appear to be derivative of official ASL boards, even though they are 11″ x 16″ rather than 8″ x 22″.  For example, Board DD is clearly designed to resemble official Board 34.  This is presumably because the scenarios herein were originally designed for such boards.

Given that the contents are relatively scanty, the scenarios are not original, and the price is an outrageous $59.95, there is no reason to buy this product. 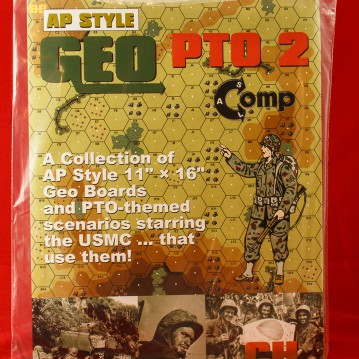