AP Style Geo PTO 3 (hereinafter PTO3) is the awkward name for the third in a series of scenario/map packs by Critical Hit featuring 11″ x 16″ Gary Fortenberry-style geoboards with a PTO theme.  Ownership of the previous modules, AP Style Geo PTO 1 and AP Style Geo PTO 2, is required to play the scenarios here–a substantial outlay of money.

The scenarios of PTO1 were not original scenarios.  Rather, they were previously published scenarios that Critical Hit has modified, to varying degrees, to fit on the new geoboards.  This seems to be the case with PTO3 as well.  For example, PTO18 (Peleliu Point Men) is a new version of LN2-5 (Storming the Point) from the Leatherneck II pack. PTO24 (A Breed Apart) is a rejiggering of the Rout Report scenario Z2 (Red Tide at Tarawa).  The others are presumably similarly derivative.

There is no indication that the scenarios were re-playtested and are thus likely to be more reliable in their original form.

PTO3 comes with 4 11″ x 16″ Gary Fortenberry-style unmounted geoboards (GG, HH, II, OCx).  They are noticeably thinner than official unmounted boards printed by MMP.  The artwork is PTO-oriented.  For example, the boards have no roads, only paths, and palm trees are represented with palm tree artwork.

One of the boards, OCx, is nothing but pure ocean hexes, so not particularly noteworthy.  Two other boards are beach boards.  Board HH is mostly ocean, with a thin beach area and what appears to be a reef. Board II is about half ocean and half land, with lots of shellholes, rubble, and debris.  Board GG is clearly derivative of official geoboard 36; the resemblances are unmistakable.  This is presumably because two of the scenarios in PTO3 were actually originally designed to use board 36.

One overlay is also included, an overlay of a long pier stretching out into the ocean.

PTO 3 is priced at the ridiculous amount of $59.95, which is a lot to ask for 8 non-original scenarios.  There are far better way to spend one’s ASL mad money than this. 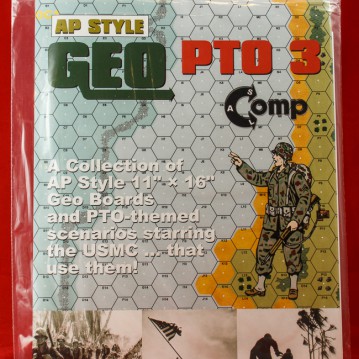