Alternative Titles/Edition History:
MMP, 1999; based on (but not the same as) the earlier Blood Reef Tarawa, published by Heat of Battle in 1996

Blood Reef: Tarawa (BRT), along with A Bridge Too Far, was one of the first two historical releases by MMP in the late 1990s after they acquired the ASL license from Hasbro.  BRT takes HASLs to the PTO for the first time, portraying the 1943 invasion of the Japanese-held atoll of Betio by the United States Marine Corps.

Blood Reef: Tarawa was originally a third party product, Blood Reef, published by Heat of Battle.  MMP, while working for Avalon Hill, made arrangements to make a revised, official version of the module; luckily, this survived the fall of Avalon Hill.

What is unique about BRT is that the striking two-part map, created by Don Petros, displays virtually the entire island–thus allowing a “completeness” not seen by any other ASL product.  The entire campaign, at squad level, can be played out on these maps.

BRT comes with three campaign games, the largest of which covers the entire invasion from soup to nuts. BRT CG I (A Hell of a Way to Die) has 5 campaign dates and begins with most of the Marines on shore.  BRT CG II (A Special Valor) has 8 dates and begins with an amphibious landing.  BRT CG III (Utmost Savagery) also has 8 dates but uses the entire map and is massive.

The scenarios are small or medium except for BRT6 (A Legend is Born), which is the “monster” scenario for the module.  It starts with the Marines at the beach.  BRT1 (The Hawk) is very small but does have a seaborne assault, which may make it a decent introduction to those rules.

Blood Reef: Tarawa is not for everyone.  Although the designers were careful to include scenarios that did not involve any beach landings, the game is really for ASLers who have an urge to storm the beaches with their Marines.  For such people, BRT is the pinnacle of ASL, and the game definitely has its devotees (some of whom have written a guide to the game which may be published by MMP).  It is a striking sight to see the invasion of Betio in all its glory–even though there are not enough counters between BRT and Gung Ho to do so, and more have to be scrounged, stolen, or created.   In addition to missing counters, some of the counters in BRT also had errata on them and had to be reprinted (appearing in ASL Journal #2).

At some point, someone created a Tarawa “extension map” that reproduced the far tip of the island missing from the HASL maps.  It is no longer available at its original location, so Desperation Morale has made it available here:  https://www.desperationmorale.com/wp-content/uploads/1999/02/Addonmaptarawa-scaled.jpg.

Associated rules and explanations can be found here: https://www.desperationmorale.com/wp-content/uploads/1999/02/Tarawa_addon_rules.pdf.  Apparently Italian ASLer Marco Oreste Mario Lombardi was the person who created this.

In 2010, MMP published a one-off magazine, the Blood Reef: Tarawa Gamers Guide that is chock full of articles related to this unusual module. 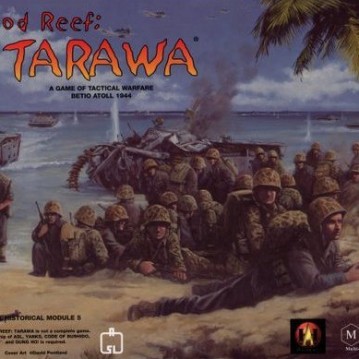