Critical Hit Magazine Tanks Special Edition.  36 pages (plus 12 scenarios included separately on cardstock and a color village overlay).  Critical Hit Magazine’s first “Special Edition,” the first of three, made keeping track of the magazine (which already had two numbering systems) even more confusing.  Originally released in 1996, it was reprinted in 2001 with a different color (and artwork that would not engender legal difficulties).   Interesting articles include a piece on desert tactics by Rob Modarelli and designers notes and commentary for Jatkosota by Ray Tapio.

None of the scenarios in this issue have received a lot of gameplay; for some, the reason may be that they are so vehicle-heavy or are in other ways very large.  One scenario that may be worth a look is a Chinese-Japanese scenario, CH65 (The Seton Block), designed by Brian Martuzas.  However, this is not one of the better issues. 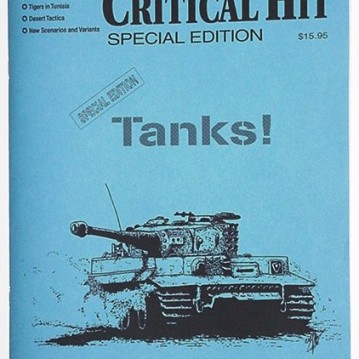