GWASL IV:  Samsonov’s Army (hereinafter GWASL IV) is the fourth in Critical Hit’s series of scenario/map packs trying to bring ASL rules to World War I.  Before reading this write-up, the write-up for GWASL I, the first in the series should be read, as many of the comments made there apply to this product as well and will not be repeated.   At the very least, the main take-away should be that ASL is ill-suited for representing World War I tactical combat and GWASL does a poor job of trying.

Previous GWASL packs introduced the Germans, British, French, and Americans; this, the fourth pack, introduces the Russians.  The Russians appear with the following squad types:  Elite 4-4-7, 1st Line 4-4-6, 2nd Line 4-2-5, and Conscript 3-2-5.  They also get a 5+2 leader.  They get no commissars, no assault fire, and no spraying fire (except for machine guns).  There is no provision for post-Revolution Russians.

Most of the remaining rules repeat rules already introduced in previous GWASL packs (one of which, GWASL I, is required to play the scenarios of this product).  Observation Balloons are introduced, as are “improved shellholes.”  There are 3 pages of Chapter H-style vehicle and ordnance notes. In addition to the rules there is a cardstock “Quick Reference Data Card” play aid much of which was based on Ole Bøe’s popular QRDC–though this was apparently done without permission and without credit (the card says “developed from public domain pdf”).

GWASL IV comes with 6 11″ x 16″ unmounted geoboards (printed on lighter stock–perhaps heavy paper–than the cardstock of “official” unmounted geoboards) in the style developed originally by Gary Fortenberry for MMP.  These boards–A1, A2, A3, A4, A5, and A6–are mostly countryside/wilderness scenes, with one board featuring a river.  Critical Hit has developed a habit of repurposing their own previously printed geoboards, often with mild terrain modifications, so it is possible that one or more of these boards may have appeared in similar form in some other product.  However, they may also be completely original.  Graphically, they look okay.  They have the building pixelation problem that has appeared in all Critical Hit geoboards of recent years, but the fact that there are relatively few buildings and they are generally one-hex buildings makes the problem less visible than in some other products.

Some of the scenarios appear to be generic scenarios rather than scenarios depicting specific tactical actions.  GWASL31 (The Kerensky Offensive), for example, has a historical description that just describes broadly the entire offensive and it looks like the combat set up by the scenario did not specifically happen.  Similar in nature is GWASL32 (Sacrifice for Joffre), which seems like a generic scenario set during the Russian March 2016 offensive.  The Russians are identified only as “elements of the II Army” and the Germans only as “Elements of the XXI Army Corps, X Army.”  At least half of the scenarios in this pack seem to be this sort of generic scenario rather than any actual specific tactical action. 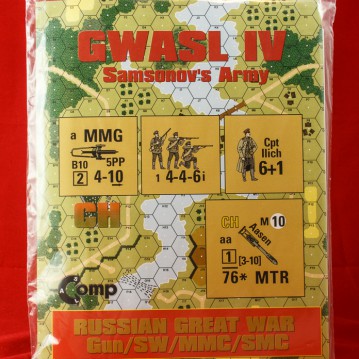