Hot Stove Pack 2 contents: As above.

Hot Stove Pack 3 contents: As above.

Hot Stove Pack 6 contents: As above.

The Hot Stove Pack series is a series of 6 scenario/map packs published by Critical Hit in 2017 around a strange common theme. Each pack contains a handful of old scenarios refitted to take place on a large-hex non-standard geoboard (one board per pack). The apparent aim of this series was to attract people who like playing DASL scenarios or are drawn to the idea of large-hex maps generally.  However, the packs in this series offer little value to the ASLer.

The name for the series (“Hot Stove Packs”) was taken from a series of scenario/map packs Critical Hit released for its ATS game system circa 2006/2007, but the relationship stops there.  Based on a comparison of Hot Stove Pack 1 from this series with the same pack from that series, there seems to be no similarity in board or scenarios.

Each Hot Stove Pack contains a different non-standard geoboard that is 13 hexes wide and 33 hexes long (in other words, think of the hexes in a standard 8″ x 22″ ASL geoboard and imagine that the board is a little thicker, being 13 hexes wide instead of 10 hexes wide).  It is not clear whether these boards link to each other, but presumably not, as none of these products seem to be required prerequisites for others in the series.  It is almost a certainty that Critical Hit will not support any of these boards with future scenarios (Critical Hit just doesn’t do that with its own geoboards), so basically the only use the board offers is for the small number of scenarios that come in the same pack, or for DYO purposes.

Each board is formed from 6 glossy 12″ x 18″ heavy paper/light cardstock map panels, which must be assembled to form the board.  Assembling more than 4 of these panels gets increasingly awkward. Judging from Hot Stove Pack 1, most scenarios will utilize either the entire board area or most of it, so assembling the full board will be a necessary evil. Critical Hit claims that an assembled board has dimensions of 24″ x 50.”

Standard ASL hex sizes are approximately .81″ across.  Red Barricade (and many other HASL) hexes are 1″ across.  Hot Stove Pack hexes are are about 1.81″ across, or nearly twice as large as a standard-sized hex.  DASL hexes, however, are 2.2″ across.  So Hot Stove Pack hexes are still smaller than DASL hexes but considerably larger than a standard-sized hex (and can fit a great many counters with ease).  None of the scenarios in Hot Stove Pack 1 are particularly large, though, so there isn’t much of a practical reason for having a large-hex map for them.

Basically, that leaves the aesthetic appeal that some ASLers, at least, feel that large-hex maps have.  Unfortunately for those ASLers, aesthetic appeal is just what many of the Hot Stove Pack boards lack, and there is one big reason for this:  buildings.  In recent years, Critical Hit has significantly improved the general quality of its map artwork, making many attractive maps.  It has also eliminated or reduced a number of bad digital cartography habits that it once had, such as cloning terrain.

However, it has continued to have a very real problem with regards to buildings on its maps.  Desperation Morale does not know what software Critical Hit uses to create its maps, but much of the map artwork seems to be done using vector graphics, which can scale up or down with ease (they are designed to do that).  However, for buildings, Critical Hit seems to use bitmap or raster graphics, or captured images of bitmap or raster graphics.  The problem with bitmaps is that they do not scale upwards.  When enlarged beyond their native resolution, they pixelate.  Or if an image of a bitmap is captured and scaled in some other format, it may become blurry.  It’s not clear what combination of techniques Critical Hit uses, exactly, and they have improved, in that formerly all of their buildings had this problem but more recently only some of their (standard-sized) buildings noticeably exhibit this issue.

But you may be able to imagine what happens to such buildings when they are scaled up in size to bit hexes nearly 2″ across.  They look bad.  Their edges are pixelated and their interiors are quite blurry.  In short, they are ugly and greatly detract from any visual appeal that these boards might offer.

The other terrain all seems to be fine.  Woods, hedges, roads, etc., all have no issue.  But those buildings–ugh.

Each Hot Stove Pack comes with either 4 or 6 scenarios that play on the included board. Critical Hit admits up front that these are all old scenarios ported to the new boards, which saves Desperation Morale from the scenario forensic work that it often has to do in order to determine if Critical Hit scenarios are originals or retreads. For example, HS1#3 (Balkan Sunrise) is a port of an older Critical Hit scenario called Balkan Dawn.  That scenario uses official geoboards 2 and 12, although Board 2 is basically used for setup purposes only. So the board in Hot Stove Pack 1 (which, confusingly, is named HS2, not HS1) essentially substitutes for Board 12 in this scenario. Board 12 is quite different in appearance than HS2; basically, the only thing they share is a cluster of buildings.  When one combines that fact with the not insignificant OB changes that are made to the new version of the scenario, it is clear that what one has here is, effectively, a new scenario.  The problem is that Critical Hit gives no evidence at all that this substantially different iteration was actually re-playtested to make sure it is balanced or that there are no other issues.  If it was’t replaytested–and Desperation Morale thinks it quite likely that it wasn’t–then this is essentially a draft or unplaytested scenario put in players’ hands, making them the alpha or beta testers.

So, the bottom line for these products (which, as of this writing, sell for $29.95), is that one gets a small number of previously published scenarios (but not necessarily replaytested) for use with a large-hex map that (if the particular map purchased has any significant number of buildings on it) is aesthetically unappealing and which Critical Hit is not likely to support in the future with additional scenarios.

There’s really not a lot of value here, even if you are a fan of large-hex ASL. 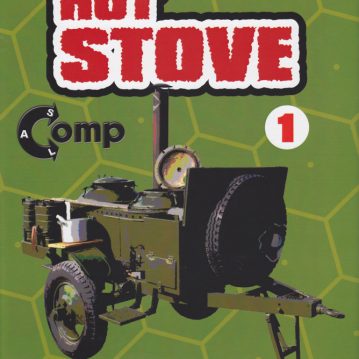