Ivan’s War (named to capitalize on a recently published book on Soviet soldiers in World War II) is Critical Hit in full exploitation mode. It contains 10 scenarios, all of which are set on the most-recycled map in ASL history. The original map appeared in the 1997 release The Dzerhezinsky Tractor Works, then was re-used in a slightly altered format in Valor of the 37th Guards. A portion of the same map was cut out, modified, and blown up for Stalin’s Fury. That same version of the map is used here in Ivan’s War. It is basically at this point a large-hex map with generic “Stalingrad-like” terrain on it. The product description assures the would-be purchaser that the map is being included “ABSOLUTELY FREE.” Sure it is.

The laziness of Critical Hit is amply demonstrated. StalPack#1 (Ivan’s Way), for example, contains the exact same historical description as the Valor of the 37th Guards scenario On Yeremenko’s Orders. Ivan’s Way appears to be a rough approximation of that earlier scenario (which itself is an approximation from End Tide from Dzerhezinsky Tractor Works. StalPak #2 (Yards Paid in Blood) does the same for Yards Measured in Blood from Valor of the 37th Guards. And so on.

One of the 10 scenarios is medium-sized, the rest are large. StalPak#9 (Zholudev’s 37th Guards) is the largest, with 23 German squads pitted against 36 Soviet squads and 13 AFVs. The Germans have AFVs, too, but the number is questionable. In addition to 10 other tanks, the scenario card calls for 27 Pz IIIHs. It’s not often an entire armored regiment gets to see battle in ASL. Of course, that is almost certainly errata. The scenario is a clone of the DTW scenario To the Banks of the Volga, which calls for only 3 Pz IIIHs. Clearly some mistake was made–and no proofreading caught the rather amazing error. Apparently CH even has problems when cannibalizing its own scenarios.

This product is a transparent attempt at a fast buck, a throw-back to some of Critical Hit’s shoddy products in the late 1990s. Two thumbs down. 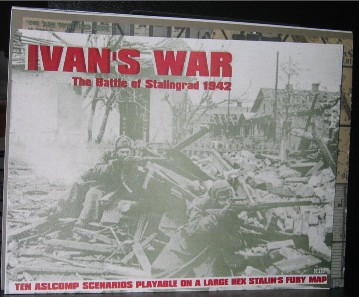