Version 1.1:  As above, but includes 12 poorly done unmounted Tiger tank counters and a revised overlay

This campaign game, uncredited but apparently designed by Ray Tapio and Steve Pleva, is one of Critical Hit’s earliest releases.  A plug for the product exists in Trail Break newsletter #1, issued in the fall of 1993, suggesting that it may have actually pre-dated the formation of Critical Hit itself.  That plug offered it for free to anyone who sent in a SASE.

This campaign game is NOT a Platoon Leader campaign game (Platoon Leader had not been invented yet). It consists of five linked scenarios (called “phases”). The rules are unbelievably difficult to read; the type is so cramped that it appears that the rules should have been more than 50% longer, but the text was deliberately jammed in to make it fit. Trying to read the rules is immediately headache provoking.

The only thing that is not dreadful about this product is the hill overlay. Only completists will want this one.

Version 2.0 Comments:  Although no one had asked for it, in 2014, Critical Hit released a new version of Operations of SS Panzer Abetilung 102 in the Normandy Campaign.  This version takes advantage of recently upgraded printing equipment to create a set of color hole-punched (for inclusion in three-ring binders) rules that are finally readable.  These 4 pages include a bit over a half-page of designer’s notes in which it is explained that the origins of this module date back to 1993, when it was created to create a special play experience for a well-known Ohio ASLer (who sadly passed away fairly recently) visiting a group of New York ASLers.

The map layout in Version 2.0 calls for maps 19, s4 (see below), x16, x13, 17, and x10, which the reader will note seems different from the maps listed above.  Though it is not adequately explained in the rules, the x-maps refer to boards from Critical Hit’s Sweet 16 Geo Board Collection, a product that has received a Desperation Morale CONSUMER ALERT warning.  Luckily, there is no reason to purchase that product to play this one; it was not even playtested with the x-boards and only the original boards should be used, with the possible exception of s4, since the overlay from earlier versions is not included here.

s4 is a new style of Critical Hit geoboard.  It is neither mounted nor printed on cardboard like ASLSK-style geoboards.  Rather it has been printed on two sheets of heavy paper/light cardstock (the same thickness as that of official overlay sheets).  The half-boards have not been trimmed, meaning the board depictions have white space around them that must be physically removed by the purchaser using scissors or a rotary blade trimmer.  In other words, players have to physically assemble the board, like a kit.  They may then discover that the board is 1/8″ of an inch shorter than official boards (or any boards done correctly) and will not mate up right along the narrow edges of the board.  Luckily, perhaps, this particular product does not require maps to mate up that way.  But it is a disappointing attempt at a map, nevertheless.

Overall, the new version is still better than the old version, but that may be damning with faint praise.  There is still no real reason to purchase this unless one is a completist–especially at the price of $19.95, which is really expensive for what amounts to four sheets of colored paper. 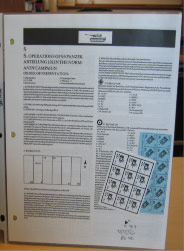