Russian Rarities III (RR3) is the third product by Critical Hit ostensibly centered around rare Soviet AFVs on the Eastern Front.  Both previous products, Russian Rarities 1 and Russian Rarities 2: Rocket’s Red Glare garnered negative receptions by Desperation Morale, each for somewhat different reasons.  It should be noted that the RR3 product packaging claims that both of those products are “required” for this product (see below for the apparent reason why).  Note that RR1 sells for $90, RR2 for $100, and RR3 for $90, so it requires a considerable outlay of cash to be able to play all the scenarios here (even leaving aside the various official modules also required).

RR3 is centered around rare Soviet AFVs, but it doesn’t provide all that many in this product; only a half-countersheet’s worth of counters.  These 88 counters represent about 23 different Soviet vehicles, including trucks.  Note that not all of these vehicles are actually rare or excluded from the system. A number of the counters on the countersheet are actually duplicates of vehicles from Beyond Valor (such as six T34 M40s) or are duplicates from previous Russian Rarities products.  So if you somehow thought you didn’t have enough T-18s in Russian Rarities 1, now you have even more.

Thus the product comes with a tiny amount of counters and only a portion of those counters actually represent new AFVs.  This is why RR3 comes with only a single sheet of paper representing “Chapter H”-style notes, and of those two pages, only one page is devoted to vehicle notes.  RR3 provides vehicle notes for exactly four “vehicles”:  1) the DUKW, 2) the T-37 20 & T-38 20, and 3) the T-38 TT.  This all also strongly suggests that the various “Rarity” products were actually originally intended as one product but were split up and padded to maximize $$$. It should be noted that the die-cutting on the 5/8″ counters is actually good–something worth mentioning because in most recent CH products, the 5/8″ counters do not have good die-cutting.

With so few actual new counters, the most significant physical part of RR3 then becomes the included geoboards, and there are a lot of them (11, to be exact).  Critical Hit website marketing copy describes them as “all new” boards, but then says that there are “eight new boards.”  So were three more boards added later, or were there eight “new” boards and three reprint boards?  Impossible to tell.  Critical Hit’s recent record in printing “new” geoboards, whether 8″ x 22″ boards of “Gary Fortenberry”-style 11″ x 16″ boards, has been rather spotty.  Leaving aside the physical issues, which are not present in RR3, and leaving aside the graphics issues such as poor building graphics (which are present in RR3), one of the main concerns has been that many of the geoboards are not original, being either derivative of official ASL geoboards or derivative of previously published Critical Hit geoboards. CH has often used the same board, or variants thereof, in different products.  So are the RR3 boards truly original geoboards?  A quick perusal of other recent CH geoboards suggests they might be, but the check was not comprehensive and there remains a possibility that some of the boards in RR3 are not truly new boards.

Let us hope that is not the case here and let us assume, for the purposes of this write-up, that it isn’t the case. Making that assumption, the 11 included boards are a relatively eclectic mix of geoboards, from woods-oriented boards to hill boards to boards with wide open terrain. Six of the 11 boards contain slopes, in some cases a tons of slopes, so players ought to familiarize themselves with slope rules. Boards 11 and 9 are the most interesting.  As is true for all modern CH geoboards there are problems with the building graphics (some of which are poorly rendered bitmaps) and a couple of boards have other, typically minor graphics issues as well.

RR3 introduces a new terrain type, Steel Truss Bridges, which is simple, and a second new terrain type, Worker Housing, which is a useful addition to the ASL terrain lexicon, at least for the eastern front.  These hexes, which exist only on board R9, each contain two “dormitory” style buildings.  Their TEM is +1, fully-tracked vehicles enter the hexes a bit differently, fire spread is a tad different, and mortars can be fired from such hexes, though units that do so may not claim building TEM through the mortar CA.

RR3 includes 10 scenarios. One of them, the so-called “bonus scenario,” RR3-Bonus (Panzers on Ice) is simply a Finland at War scenario, FAW2 (Fire and Ice) re-purposed (but probably not replaytested) to play on the new geoboards. Other than that, though, the RR3 scenarios may actually be original scenarios, something that has been in short supply recently from CH non-HASL products. There is a chance, however, that the scenarios were originally designed for official ASL geoboards and were later “converted” to play on the RR3 boards, perhaps without playtesting.

Aside from the reprint scenario, alluded to above, and one more Finnish-Soviet scenario, all but one of the scenarios feature Soviets and Germans on the Eastern Front.  The exception is RR17 (War in the Wasteland), a rare Chinese-Soviet scenario set during the 1929 Sino-Soviet War.  This scenario takes place at Dalai Nor in Inner Mongolia (i.e., China, though the scenario card mistakenly places the action in the Soviet Union). Here a large group of Soviets with some T-18 light tanks get to take on 18 Chinese squads, almost all of them 3-3-6 conscript squads, in a fortified position.

Of the 10 scenarios, most are large or quite large in size; only a few could be considered small- or medium-sized. Three scenarios have Air Support and the same number have OBA, while a couple of other scenarios utilize some of the OBA or Night rules for special circumstances.

RR26 (Rolling on the River) is interesting, in that it features a Soviet river crossing utilizing DUKWs and supported by 6 T-152s (among other vehicles) against Finnish defenders. RR25 (Five Kopeck Crossing) is another Soviet river crossing, sans DUKWs this time, against Germans and a bunch of mines.

The largest scenario in RR3 is RR24 (Ghosts of Yakhroma), a massive slugfest spread over 8 maps just chock full of Deep Snow and Extreme Winter. The Soviets have 42 squads, three commissars, 18 AFVs, 4 aerosleds, 4 rocket-launching vehicles, and 4 guns. The Germans get 27 squads, 2 guns, 29 tanks, self-propelled artillery pieces and halftracks, and three guns. Plus there’s planes and OBA and flamethrowers and DCs and skis and all sorts of other stuff.  It looks like the sort of super-meaty East Front action that a lot of gamers might salivate over.

Of the three Russian Rarity products released, this one is the best.  It has a lot of maps and some interesting scenarios that make up for the extreme deficit of rare AFVs provided. Of course, playtesting is not much done with Critical Hit these days, so the scenarios should be considered as likely rough drafts rather than finished scenarios.  The need for the two other Russian Rarity products, both of which are extremely expensive and not at all good, makes this product much less inviting as well.

Critical Hit did offer a “RED Russian Rarities III Upgrade Set” for $19.95, the only components of which were the 176 Red counters.. 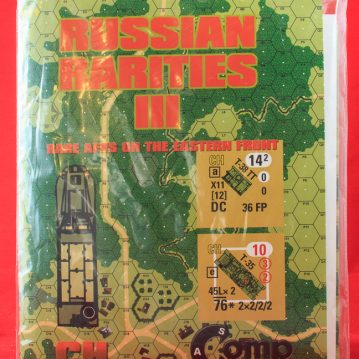